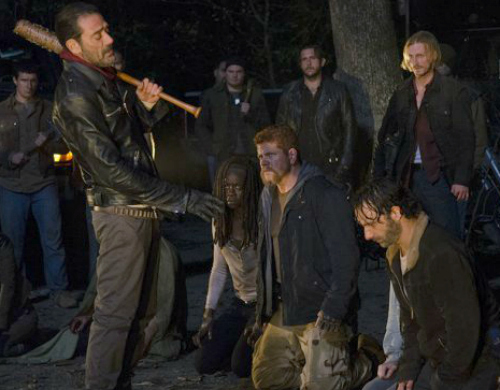 Is it Glenn who dies on The Walking Dead Season 6 finale? ‘The Walking Dead’ spoilers for season 7 center on who got Lucilled, but sightings from the set indicate Glenn (Steven Yeun) is confirmed dead, yes a Glenn death is for sure and he is the LV (Lucille Victim) – plus the rumors of Ezekiel, King of the Kingdom, casting have now been debunked. Here’s the TWD Season 7 hot news we know.

While the other potential victims of Negan (Jeffrey Dean Morgan) and his brutal bat Lucille have been seen out and about in Atlanta shooting scenes for TWD Season 7 Episode 2, 3 and beyond, Steven Yeun is nowhere in sight.

Steven has been busy on Twitter retweeting ‘The Walking Dead’ posts and giving props to TWD cast members, but this seems to be red herring activity. He posted a recent video on Facebook that hints Steven may be in South Korea filming Okja, a Plan B (i.e. Brad Pitt produced) film.

Abraham (Michael Cudlitz) and Daryl (Norman Reedus) were both hot LV candidates, but both have been on set filming for weeks along with most of the rest of the cast including Eugene (Josh McDermitt), et al.

The other big TWD news this week is about Ezekiel, King of the Kingdom. While a puppet version of his tiger Shiva was spotted in a big production truck, the news that Harold Perrineau (Lost, Zero Dark Thirty) was cast have been debunked by the actor himself.

See his tweet below showing love for TWD but disavowing the casting spoilers. If Perrineau was part of the cast, he would likely have remained radio silent if not allowed contractually to confirm, but wouldn’t have issued a firm denial.

It’s a shame because Perrineau is a great actor and would have been a nice addition to The Walking Dead, the AMC zombie show. Whoever is playing Ezekiel, the actor should be in Atlanta and shooting (or will be soon) as there have been tons of sightings of armored kingdom soldiers.

We’ve also got a spoiler on a spoiler. Comic Con San Diego is late July and the big news is that ‘The Walking Dead’ is hiding the Ezekiel actor from prying eyes taking pics for Spoil the Dead and other sites so they can reveal Ezekiel and Shiva in the trailer.

It makes sense for the Season 7 trailer to focus on The King and his tiger because showing too much else would give away the LV which TWD showrunners are also trying to play close to the vest, but has leaked anyway.

In a recent interview with Uproxx, showrunner Robert Kirkman said:

Other spoilers include that Negan will kick off Season 7 by taking Daryl hostage at Sanctuary and tries to recruit him as a Savior and torments Daryl when he refuses. Despite fan outrage at the brutal LV cliffhanger, we have to agree that Season 7 does look cool.

Check back with CDL often for more ‘The Walking Dead’ spoilers for Season 7.