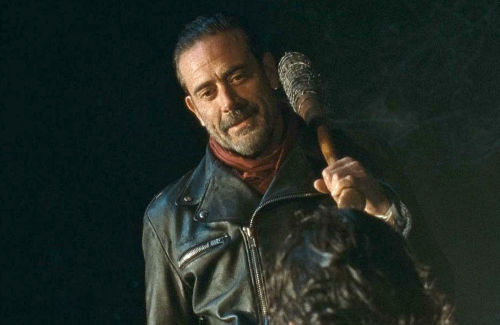 ‘The Walking Dead’ spoilers for Season 7 are leaking like a sieve and the latest pics from the set show The Saviors are invading Alexandria. The best info comes from the legion of locals in Atlanta feeding info to the Spoiling Dead forum. But now it looks like AMC has a plan to thwart would-be leakers.

TWD showrunner Greg Nicotero spoke to IGN at Universal Studios Hollywood during a promo event for the new ‘The Walking Dead’ attraction that opens July 4th at the theme park. Nicotero addressed the proliferation of spoilers cropping up.

When asked about the possibility of the LV (Lucille Victim) being exposed ahead of the Season 7 premiere, he said that one method they are using to confuse reports from set-watchers in Atlanta is to change the shooting schedule.

Nictoero says that even though we see reports of certain actors are on set and the presumed order of episodes being shot, it doesn’t “necessarily mean that we’re shooting in order.” Of course, that could simply be a tool to make us think that the spoilers we’re seeing are not valid.

AMC and Nicotero may be feeding us red herring fodder to try and detract from the validity of set and shooting leaks. However, what’s clear is that Steven Yeun (aka Glenn Rhee) was in Atlanta earlier in the Season 7 shoots and is gone now. 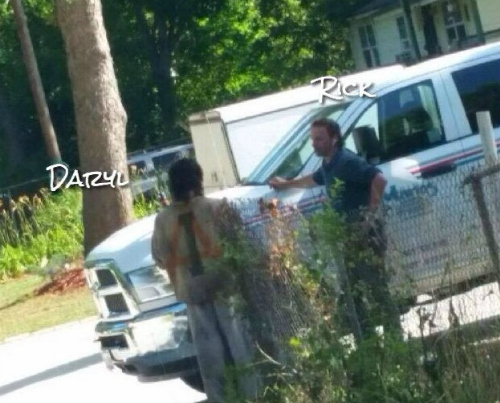 He’s the presumed LV based on the comic books, shots taken by TWD set-watchers, plus Yeun’s own IMDB and social media activity. If they fooled us and it’s NOT Glenn, that will be the real shock. But what’s interesting in the latest batch of spoiler photos is The Saviors.

Saviors have been seen at the Alexandria Safe Zone (ASZ) shooting location which aligns to action from the comic book. In the books, Negan and some Saviors show up and start some trouble but are thwarted initially although the community sustains damage. We’ll see how it goes on TV.

Also spotted at the ASZ shoot was Austin Nichols (aka Spencer Munroe) and Austin Amelio (Dwight) which is exciting. In the books, Spencer (Deanna’s son, if you don’t remember) tries to supplant Rick as leader by cutting a deal with the Saviors – it doesn’t work out…

Another item of interest is that the DVD release of Season 6 will include a very “blue” version of Jeffrey Dean Morgan’s introductory Negan speech which is punctuated with lots of f-ks and other profanity. In the books, Negan is a potty mouth – they cleaned him up for TV. 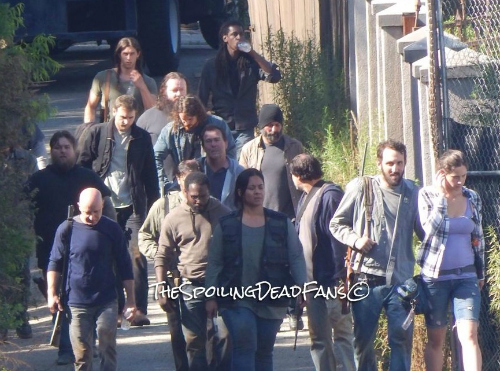 However, Nicotero said they shot the NSFW version of the monologue as well and he says it’s Jeffrey Dean Morgan “saying f-k every other line.” So if you were hoping for a saucier version of Negan that aligns to the books, you’ll need to buy the DVD set.

What do you think fans of ‘The Walking Dead’? Do you think Nicotero’s claims of shooting the episodes out of order is a smokescreen to fool fans and it’s really business as usual down at the shooting locations in Atlanta?

Share your comments below and check back with CDL often for more ‘The Walking Dead’ spoilers for Season 7.