The Walking Dead Spoilers – Will Midseason 6 Premiere Kick Off With a Major Character Death? 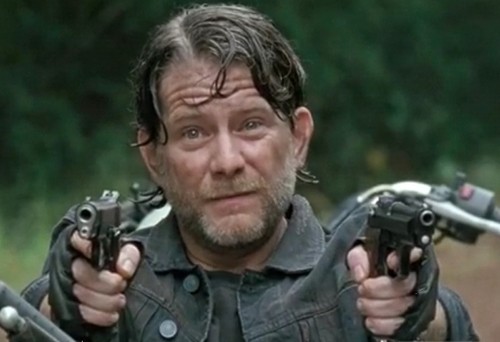 “The Walking Dead” spoilers  indicate a major character death – footage released today by AMC show the first four minutes of Season 6 Episode 9 that will air Sunday, February 14 and reveals a big showdown between the Saviors – Negan’s (Jeffrey Dean Morgan) band of post-apocalyptic thugs – and our heroes.

The four minutes of new footage culminates in the primary Savior (Christopher Berry) preparing to shoot either Abraham Ford (Michael Cudlitz) or Sasha Williams (Sonequa Martin-Green) – or both. He’s got two guns out and threatens to kill them and says it’s their usual way of doing business.

The lead Savior, who may be Dwight from the graphic novels – but is not confirmed yet – tells them that when they meet people from other groups, they usually kill one straight off so they know they are serious. He didn’t do that with them, though, until Abraham pushed for answers.

Abraham growls out “Who’s Negan?” much as he did when they first came to Alexandria and he gruffly queried, “Who’s Deanna?” At least Abraham is consistent. Although the Saviors take out Abraham via a crossbow bolt to the head in the novels, Cudlitz is listed for all of Season 6 on IMDB as is Martin-Green.

Steven Yeun, however, is not. His last listed episode is the one on February 14 and is inconsistent with other actors on the show. Rick Grimes (Andrew Lincoln), Carl Grimes (Chandler Riggs), Carol Peletier (Melissa McBride) and Maggie Greene (Lauren Cohan), among others, all show active thru season’s end.

So while the tense spoiler footage seems to indicate that the core group will lose someone right away as Season 6 picks back up, it won’t be any of those that we see in this showdown. But anyone who has picked up one of the graphic novels knows that Glenn falls prey to Negan and his brutal bat Lucille.

We also know that Alexandria faces an overrun by a walker horde right now and that we’ve seen many of the Alexandrians that are not part of the core group go down victim to the Wolves and walkers. Dr Denise Cloyd (Merritt Wever) also doesn’t list appearances throughout Season 6 on IMDB.

Does this mean the group will lose their only doctor and a fantastic actress? Wever was phenomenal on Nurse Jackie so it would be a shame for her to go. But “The Walking Dead” usually carefully guards its cast secrets and impending deaths so the IMDB inconsistencies could mean nothing – or everything.

Stay tuned to CDL for more “The Walking Dead” spoilers, recaps and news as the Season 6 mid-season premiere gets closer.