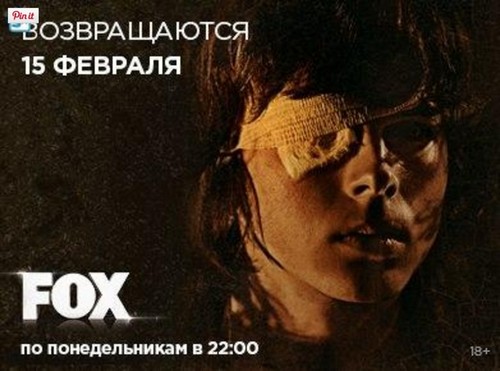 “The Walking Dead” spoilers for the last half of Season Six, returning Sunday, February 14, reveal that we will finally see some of the critical and bloody action from the graphic novels that has, so far, not been part of the beloved yet violent TV show. If you need to refresh on the Fall finale TWD episode then check out our detailed recap here.

One major detail is Carl Grimes (Chandler Riggs) losing an eye. In the graphics novels, as Alexandria is overrun, Carl is accidentally shot in the face and Denise Cloyd (Merritt Wever) saves his life but the eye is destroyed.

A Russian FOX station leaked a promo that clearly shows Carl with a heavily bandaged eye. The big question is, will showrunners leave him an eye patch and take the eye permanently or will they downplay the wound so Chandler Riggs isn’t fated to wear the eye gear forever?

After all, in the novels, Rick Grimes (Andrew Lincoln) lost his hand to the Governor yet that didn’t happen in the show likely because it would be too tedious to green screen the main star’s hand for the entire run of the show.

So in addition to seeing Carl finally suffer a grievous injury, the other big action coming when Season Six picks up is the introduction of Negan (Jeffrey Dean Morgan) the leader of the Saviors who is essentially a war lord and perhaps the most terrifying villain of the graphic novels.

Readers of the books know that it’s Negan and his beloved barbed wire-wrapped baseball bat called Lucille that spell the demise of Glenn Rhee (Steven Yeun). With Maggie Greene (Lauren Cohan) now preggers with the couple’s baby, the idea of losing Glenn is horrible.

We all thought for sure he was dead with the dumpster incident, but he survived it. The question is, will showrunners allow Glenn to survive the dreaded Negan-Lucille encounter? Or will they kill him off as they did in the graphic novels?

The Walking Dead has had some major and brutal characters endings over the past years, but this one would be heartbreaking. Perhaps with the Glenn near-death call, TWD showrunners were preparing us for his inevitable loss.

One thing we have to look forward to when Season Six picks up is a massive pile of zombies. Greg Nicotero did a recent interview with Entertainment Weekly and promised 1300 walkers in the upcoming Alexandria invasion plus a new perspective – scary night stuff.

Nicotero said, “I felt that it was very important to introduce a bit of the genre element of the spooky, nighttime, boogeyman-coming-out-of-the-dark, Night-of-the-Living-Dead sort of vibe and feeling.” This sounds amazing and scary.

Are you ready for Season Six of The Walking Dead to pick up mid-season? What do you think about the big leak about Carl’s injury? Share your comments below and come back to CDL for more “The Walking Dead” spoilers as we head into Season 6 on Valentine’s Day.