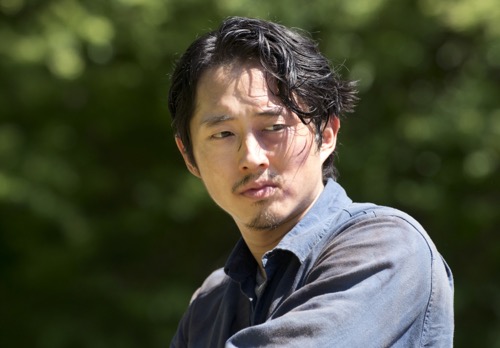 ‘The Walking Dead’ season 6 has been dominated by Glenn’s “death” and causing debates on whether or not Steven Yeun’s fan-favorite character is alive. The latest episode has fueled the fire on the argument as Steven Yeun’s name was missing from the opening credits. Fret not, we have some details on Glenn’s return episode.

Last night on season 6, episode 4 of ‘The Walking Dead,’ fans who believe Glenn has become zombie food pointed out Steven Yeun’s name was noticeably absent from the opening credits. This is the first episode in which Steven’s name has not been a part of the credits. The show has remained tight-lipped on Glenn’s apparent death. Showrunner Scott Gimple issued a statement via ‘The Talking Dead,’ which is not the typical protocol when addressing the death of a character.

Steven’s name may have been removed from the credits of the Morgan-focused episode, ‘Here’s Not Here,’ but as CDL has reported – Yeun has been spotted filming at The Hilltop location, which has not been discovered in the current plotline of TWD. In addition to multiple sightings of Steven on set, the actor recently signed a new contract with the series.

So why remove Steven Yeun from the credits? Most likely to toy with eagle-eyed fans. It seems AMC has learned its lesson after accidentally spoiling the death of Shane (Jon Bernthal), and is going to greater measures to protect its shock value.

As we’ve covered – CDL knows Glenn’s fate. Fans won’t get the official answer as to whether or not Glenn is dead until episode 7. Next week’s episode will cover the aftermath of the Wolves attacking Alexandria and Norman Reedus fans will take delight in a Daryl-heavy arc in episode 6.

Glenn’s return has also been rumored to involve another character. Some theories suggest Enid will be involved with the pizza boy’s rescue, while others believe Glenn’s return will segway the introduction of Paul Monroe a.k.a. Jesus. Tom Payne has been cast to portray the role of Jesus but isn’t due to show up in episode 10.

So how does Glenn survive? It could be as simple as using that flare gun to distract the walkers after he seeks refuge under the dumpster. However, Glenn manages to narrowly escape death again, plan on seeing his return by episode 7 on TWD.