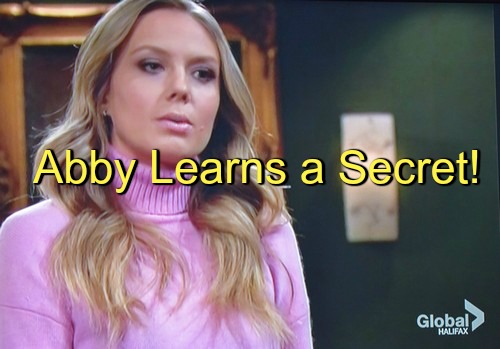 “The Young and the Restless” spoilers tease that Abby (Melissa Ordway) will face some obstacles as February gets underway. The year got off to a bumpy start for Abby. Right after she returned from her honeymoon, Abby was stunned to find out she’d be helping Stitch (Sean Carrigan) raise Max (Jared Breeze). The situation has become slightly less strained, but there are still problems Abby will have to deal with.

Stitch will continue to be very protective of his son and it could leave Abby feeling like an outsider. Y&R buzz suggests that Max could stir up more mischief in an effort to cause drama for his dad and stepmom. In other words, life as a newlywed probably won’t get any easier for Abby.

Of course, Abby will also have to tackle some challenges at her new job. We recently learned Abby will be taking over Gwen’s (Nadine Nicole) position in Dr. Neville’s (Michael E. Knight) project. As Abby tries to learn the ropes, Ashley (Eileen Davidson) could struggle to keep her secret.

Ashley is responding well to her treatment, but she’d prefer to keep all of her health news to herself. Abby would be very concerned if she knew that Ashley was dying before Dr. Neville intervened. Perhaps Ashley just doesn’t want to worry everyone, especially if her condition is improving.

However, soap characters are typically nosy. Abby might suspect that something’s up and that could create strife. Ashley tends to lash out at anyone who gets close to the truth. Abby may end up feeling rejected by her husband, stepson and her mother. On the other hand, Abby might figure out what’s going on and Ashley could pressure her to keep quiet.

No matter what happens, it’s clear that some type of crisis is brewing. “The Young and the Restless” spoilers indicate that a major issue will arise. It’s possible that it could involve Ashley and Dr. Neville’s budding romance. Abby’s opinion may not be in line with Ashley’s as the relationship progresses.

Then again, maybe Ashley’s feelings for Stitch haven’t entirely been put to rest. After all, Ashley dreamed of Stitch’s love confession during her treatment. That caused Dr. Neville to wonder if Ashley was truly over Stitch.

Whatever the case, Abby will soon get tangled up in Ashley’s problem and it will undoubtedly lead to trouble. It sounds like tension is coming for this mother and daughter. Stick with “The Young and the Restless” for updates on the conflict ahead.

So Y&R fans, what do you think about all the drama in headed Abby’s way? Will it just keep piling up? Will Abby manage to get her life back in order?

Will Abby and Ashley clash down the road? Voice your opinion in the comments below and don’t forget to check CDL often for the latest “Young and the Restless” spoilers, updates and news.