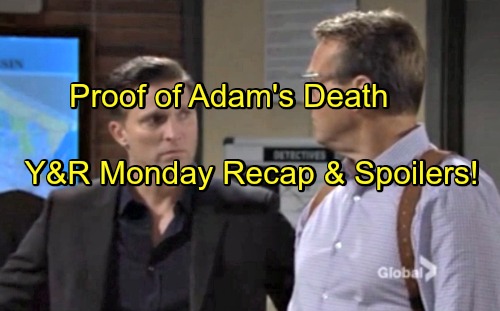 The Young and the Restless (Y&R) spoilers for Monday, September 5, tease that Paul (Doug Davidson) and Dylan (Steve Burton) will suspect that Chelsea (Melissa Claire Egan) might’ve taken off on the plane with Adam (Justin Hartley). At the penthouse, Chelsea will hear their news and come out of hiding. She’ll state that Adam wasn’t on that flight. Chelsea will want them to search for her husband.

Dylan will think they need to cut Chelsea a break, but Paul will angrily arrest her. At the Newman ranch, Victor (Eric Braeden) will express outrage over Nick’s (Joshua Morrow) accusations. He’ll urge Nick to leave if he thinks he’d really kill Adam. Nick will decide that Victor is right. He’ll offer an apology and they’ll embrace over their possible loss.

Later, Nick will find out about Chelsea’s arrest. He’ll inform Chloe (Elizabeth Hendrickson) and Kevin (Greg Rikaart) that he now believes Victor is innocent. Chloe will try to put some suspicion back on Victor, but Nick will just head out. After having a flashback of watching the cabin burn, Chloe will call a babysitter to take care of Bella (Cali May Kinder).

At the police station, Y&R spoilers say Chelsea will be desperate for answers. Michael (Christian LeBlanc) will arrive to serve as Chelsea’s lawyer and he’ll assure her that they’re investigating. Nick will walk in and get updates on some evidence that was found at the cabin.

The blood and tissue samples from the scene match Adam’s DNA. Nick will decide he should be the one to tell Chelsea that her husband is gone. Chelsea will cry out in total despair as she hugs Nick.

Of course, Adam could’ve merely been wounded in the blast. He might’ve escaped on his own or received some help getting out. The Young and the Restless viewers will remain hopeful, but the Newmans will try to accept the loss.

Victor will be devastated when he hears about the proof. He’ll tell Nikki (Melody Thomas Scott) that he’d like to be alone with his thoughts. When Victor gets in his car, Chloe will reveal herself in the backseat. She’ll state that Chelsea has been arrested and is busy blaming Victor for Adam’s murder right now.

Victor will fire back with his own accusations. He’ll think Chloe is responsible for Adam’s demise. Elsewhere, Neil (Kristoff St. John) will face some disappointment as well. He’ll learn that Lucinda (Nichelle Nichols) is fading fast.

Neil had hoped to bring the whole family for a visit, but that just won’t be possible. After telling Lucinda about his loved ones, she’ll urge him to always keep them in his life. Neil will stay with Lucinda until she passes away. He’ll spot a note his mother left for him in her Bible and he’ll take it as he goes.

At the pool bar, Neil will order a club soda and read the letter. Lucinda’s parting words were about her regret and great love for her son. Hilary (Mishael Morgan), Devon (Bryton James), Lily (Christel Khalil) and Cane (Daniel Goddard) will emerge. They’ll announce that they heard about Lucinda’s death.

Neil will share a warm moment with Lily and Devon as they hug. This isn’t how Neil wanted things to go, but at least he had an opportunity to reconnect with his mom. As for Adam, there’s a good chance The Young and the Restless will bring him back sooner or later.

Y&R fans will want to check out the stunning developments ahead. We’ll keep you posted as more info comes in. Stay tuned and don’t forget to check CDL often for the latest Young and the Restless spoilers, updates and news.

The Young and the Restless – Cast Photo Behind the Scenes https://t.co/awHdzkswTM via @YouTube