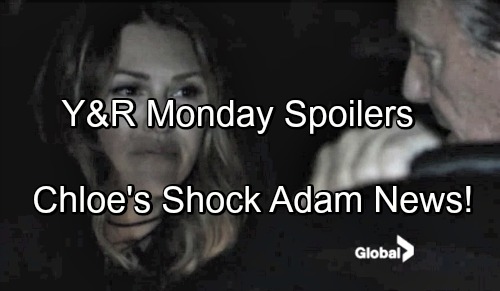 The Young and the Restless (Y&R) spoilers for Monday, September 5, tell us that an epic reveal on if Adam lives or dies is delivered by none other than Chloe. Y&R teases that Neil (Kristoff St. John) will feel relieved about how things turned out with his mother. Lucinda (Nichelle Nichols) wasn’t quite the person Neil thought she was. He probably figured Lucinda just didn’t want the hassle of a kid, but she actually gave him up because she was an alcoholic.

Lucinda needed some time to beat her addiction and clean up her life. She felt like she had to walk away to protect her son. Since Neil has struggled with alcoholism as well, he understands Lucinda’s perspective. They’ll have a chance to bond during the rest of their chat.

As this visit wraps up, Neil will indicate that he wants to return with the whole family. He’ll hope they can meet Lucinda and connect with her like he has. Sadly, Lucinda will insist that isn’t going to happen. The Young and the Restless viewers know that Lucinda is sick, so maybe she’s trying to say she won’t live long enough.

Regardless, it’s nice to see that Neil and Lucinda have made peace. Monday will bring Nichelle Nichols’ brief stint to a close, so catch her while you can. In the meantime, Chelsea (Melissa Claire Egan) will find herself in a tricky situation. She’ll be forced to hide when Kevin (Greg Rikaart) lets Paul (Doug Davidson) in the penthouse.

Chelsea will remain silent on the staircase as Paul declares that he’s looking for Chelsea. Kevin will seem nervous and Paul is sure to pick up on it. Will Paul find Chelsea or will she manage to avoid capture for a little while longer? We’ll have to wait and see, but Chelsea can’t stay on the run forever. Stick with Y&R to see what’s next for Chelsea.

Elsewhere, Chloe (Elizabeth Hendrickson) will have some business to take care of. Monday’s Young and the Restless preview video shows Chloe in a car with Victor (Eric Braeden). He’ll prepare to rip into his former partner, but Chloe will urge him to save it. She’ll suggest that Victor will want to hear what she has to say.

Before the explosion occurred, Chloe shot Adam (Justin Hartley) with a tranquilizer dart and admitted she wanted to watch him die. However, the fact that Chloe is reaching out to Victor could be a hint that she had a change of heart. It sounds like Chloe didn’t kill Adam, but she may have info that could eventually lead to his location.

It’s possible that Chloe spotted someone near the cabin as she was running away. Whatever the case, Victor should be intrigued by Chloe’s news. It’s clear that Victor needs all the help he can get right now. Nick (Joshua Morrow) certainly believes Victor was behind the explosion.

Victor will try to prove his innocence and find Adam, who is undoubtedly out there somewhere. Did Adam get away or did someone kidnap him? We’ll give you updates as more details come in. Stay tuned to Y&R and don’t forget to check CDL often for the latest Young and the Restless spoilers, updates and news.

In celebration of #YR’s 11,00th episode, The cast was thrilled to strike a pose with their very first episode number. #ICYMI, here’s another look. (Part 2)

In celebration of #YR’s 11,00th episode, The cast was thrilled to strike a pose with their very first episode number. #ICYMI, here’s another look. (Part 1)