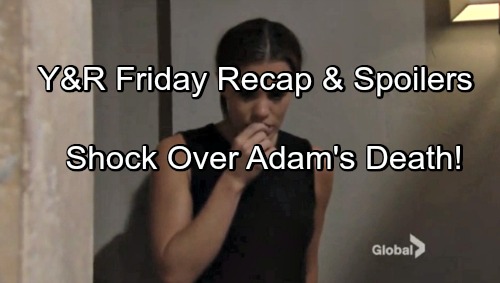 The Young and the Restless (Y&R) spoilers for Friday, September 2, tease that Chelsea (Melissa Claire Egan) will freak after the cabin explosion. Nick (Joshua Morrow) will restrain Chelsea as she insists she has to find Adam (Justin Hartley). Nick will argue that they need to leave immediately.

Chelsea will try to hold out hope that Adam checked his voicemail and got out of there in time. She’ll head over to the airstrip with Nick, but her heart will sink when Adam is nowhere to be found. Chelsea will want to head back to the cabin, but Nick won’t think that’s a good plan. He’ll urge Chelsea let the pilot take her away.

Chelsea and Nick will suspect that the cabin was deliberately blown up. They’ll believe Victor (Eric Braeden) is the only one who knew Adam’s whereabouts. Nick will assure Chelsea that he’s really going to let Victor have it.

Meanwhile, Dylan (Steve Burton) and Paul (Doug Davidson) will check out the hotel room where Connor (Gunner and Ryder Gadbois) was taken. A call will come in about the cabin explosion, which happens to be about five miles away. A witness saw a man with a woman and child nearby.

After making the short trip, Paul and Dylan will question a neighbor about the incident. They’ll realize that the blast may have been a diversion. Dylan and Paul will end up at the airstrip, but the plane will already be taking off. They’ll spot Connor’s dinosaur toy on the ground.

At the Newman ranch, Victoria (Amelia Heinle) will bring Travis (Michael Roark) by and Victor will get an introduction. Victoria will insist that her boyfriend saved the day by preventing Summer’s (Hunter King) marriage. Victor will wonder what type of repayment Travis expects. Travis will grumble about Victor trying to buy him off.

Victor will get fed up with Travis and urge Victoria to show him the door. After they exit, Victor will speak with Nikki (Melody Thomas Scott) about Adam and Chelsea. He’ll state that he can’t reach out to them right now. Making contact would be too risky.

Speaking of risks, Billy (Jason Thompson) will take a few at an Abbott family dinner. He’ll toss around some cryptic comments about the dirt Jill (Jess Walton) has on him. Jack (Peter Bergman) and Ashley (Eileen Davidson) will want Billy to spill it.

A horrified Phyllis (Gina Tognoni) will desperately try to shift the conversation in another direction. Ashley will be hesitant to drop it, but Billy won’t provide details. He’ll promise Ashley that he’s fine with Victoria moving on because he’s moving on as well. Billy will add that Bethany (Chrishell Stause) isn’t the woman in his future.

After Ashley leaves the table for a moment, Jack will raise his glass to Billy. He’ll toast to the idea of Billy getting what he wants. When Jack excuses himself to take a call, Phyllis will lash out at Billy. She won’t understand what Billy thinks he’s doing with this appalling behavior.

Billy will suggest that Phyllis is enjoying the thrill as much as he is. She’ll hate that the fact that they’ve formed a relationship and Billy will also experience some self-loathing. However, that won’t change how Billy feels. He’ll indicate that he can’t help himself. Billy will take Phyllis’ hand beneath the table.

At the penthouse, Chloe (Elizabeth Hendrickson) will struggle to catch her breath after running through the hidden tunnel. She’ll put on some fresh clothes and chat with Kevin (Greg Rikaart) downstairs. Kevin will note that Adam wasn’t with Chelsea and Connor in her vehicle. He’s been tracking the car.

Later, Chloe will look up something on the computer. She’ll remember putting a tracking device in Connor’s stuffed dinosaur. Upstairs, Y&R spoilers say Chelsea will arrive through the passageway. She’ll head down to give Chloe and Kevin news on everything that happened.

Chelsea will quickly point out that Connor is safe, but the same can’t be said for Adam. She’ll start to sob as she explains the day’s shocking events. Kevin will offer reassurance, but Paul’s knock at the door will disrupt their secret meeting.

Other Young and the Restless spoilers reveal that Nick will be on the warpath. He’ll find Victor at home and immediately launch his rant. Nick will gripe that Adam is dead and it’s all Victor’s fault. He’ll ask how Victor could do this.

Nick is undoubtedly wrong about his brother’s death. Adam is a fighter and he’ll probably surface down the road. Stick with the CBS soap for updates on Adam’s fate.

Thank You to our viewers for your support today & every day! We do it all for you! Here’s to the next 11K! #YR11K pic.twitter.com/R3Kqt3u6mh