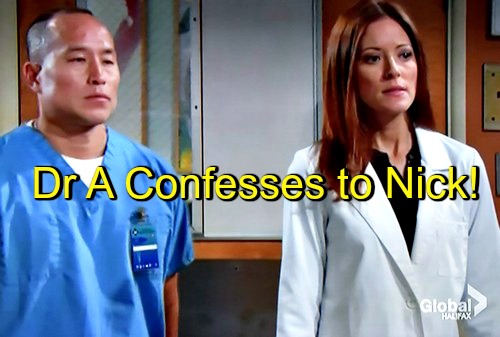 “The Young and the Restless” spoilers tease that Nick (Joshua Morrow) and Sage’s (Kelly Sullivan) scheme will take some interesting turns. Sage has no idea what she’s in for at Fairview, but it can’t be good.

We all saw how Sharon (Sharon Case) was treated. Nevertheless, Sage will try to hang in there and do whatever she can to dig up details on Dr. Anderson’s (Elizabeth Bogush) background.

Meanwhile, Nick will grow closer to Dr. Anderson and build her trust. Everything will run smoothly on Nick’s end until Dr. Anderson’s stunning confession shakes things up. “The Young and the Restless” spoilers indicate that Nick will be shocked by what Dr. Anderson has to say. We don’t know what Dr. Anderson will admit, but it should give Nick a little more insight into the situation he’s facing.

Sooner or later, Dr. Anderson’s plan will be revealed. Y&R buzz suggests that Dr. Sandy Anderson may actually be Sandra Allen, the high-school girl who broke her neck after accepting Nick’s dare. Perhaps Sandra got plastic surgery or Nick simply doesn’t recognize her after all these years.

Maybe all of this has been Sandra’s attempt to wreak havoc on Nick’s life as well as Sharon’s. We can’t forget that Sharon witnessed the incident and kept quiet about Nick’s involvement. Dr. Anderson is always trying to keep Sharon off her meds. That’s setting Sharon up for disaster. As for Sage, Dr. Anderson might want her out of the picture so she can have Nick right where she wants him. The ultimate revenge may be coming.

If Dr. Anderson is indeed Sandra Allen, Victor (Eric Braeden) could get involved in this soon. Joshua Morrow recently tweeted that Eric Braeden did some great work that will air in a couple of weeks. In fact, Morrow said it was “insane.” Morrow added that he was honored to be on the show with such an icon.

Could we see an epic confrontation about Nick’s actions and the cover-up plot? If Nick and Victor are sharing explosive scenes, that seems like a good possibility. Y&R viewers will be anxious to see the fallout of past transgressions.

Whatever the case, Dr. Anderson’s big reveal won’t be the conclusion of this storyline. It seems more mysteries will develop from Dr. Anderson’s shocker. What else could “The Young and the Restless” have in store? Stick with the CBS soap for updates on the craziness that’s coming up.

So Y&R fans, what do you think about the news that Dr. Anderson will admit something big to Nick? Will this somehow lead Nick to the truth about her history? Is Dr. Sandy Anderson really Sandra Allen?

Will Victor soon join in this mayhem? Voice your opinion in the comments below and don’t forget to check CDL often for the latest “Young and the Restless” spoilers, updates and news.