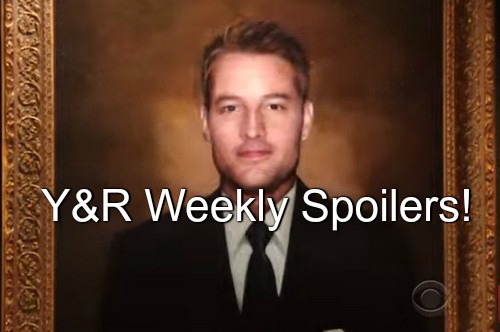 “The Young and The Restless” (Y&R) spoilers for the week of Monday February 1 thru Friday February 5 reveal that Victor will face enemies on many fronts, Sage will be at risk in Fairview, two couples get a new shot at love and secrets will be revealed – some of them dangerous! Check out these spoilers to find out more.

Sage Newman (Kelly Sullivan) is committed to getting committed to Fairview and acts kooky in an evaluation at Genoa City Hospital. One of the doctors doesn’t buy that Sage needs to be sent to the sanitarium so Sage tells that doctor alone the truth – that Dr A is after her and wants to ruin her life.

The truth gets her committed since it sounds insane. Adam Newman (Justin Hartley) doesn’t agree with what Nick Newman (Joshua Morrow) is doing in allowing Sage to be committed – he doesn’t know Nick and Sage are in on it together. Adam will remain alert and suspicious.

Nick tells Sage that he thinks they are in over their head, but she insists they press on with the plan. Nick turns to Dr Anderson for comfort – trying to work her from his side and she makes him an offer that he accepts. Later, as they talk, Dr A slips up and makes an interesting confession.

Nick is shocked by what Dr A says. Dr Anderson is revealed to some extent, but not everything is known. Not knowing that Dr A has tampered with Sharon Newman’s (Sharon Case) meds, by the end of the week, Nick confesses to Sharon what he and Sage are plotting. Sharon may ruin their scheme by warning her beloved Dr A.

Jill Abbott (Jess Walton) wants to get Cane Ashby (Daniel Goddard) back with Lily Winters (Christel Khalil). Jess throw an anniversary party for her and Colin Atkinson (Tristan Rogers) and schemes to get Lily and Cane back together at the event. She sets them up to be at the GCAC at the same time and hopes for sparks.

Michael Baldwin (Christian LeBlanc) and Cane take a meeting that worries them so they walk out on it. Who is that with? Hilary Curtis (Mishael Morgan) decides not to sign the divorce papers that Devon Hamilton (Bryton James) had drawn up.

Neil Winters (Kristoff St John) is surprised but pleased at the choice and encourages her to give it a chance with Devon. Hilary finally has a memory breakthrough about her past love for Devon and is stunned by how much it affects her.

Noah Newman (Robert Adamson) begins to panic as Billy Abbott’s (Jason Thompson) memory of the accident returns and he recalls seeing Noah’s face in the side view mirror as he was run over. Luca Santori (Miles Gaston Villanueva) knows about Noah but promised to keep the secret.

Adam doesn’t trust that Luca won’t blab and decides to take on the responsibility of shielding his nephew from Luca. Noah worries he’ll lose everything including Marisa Sierras (Sofia Pernas) and his freedom if Billy turns him over to the GCPD.

Adam is forced to keep secrets from Victor Newman (Eric Braeden) while also keeping secrets from Chelsea Newman (Melissa Claire Egan) who is terrified that Adam is turning into Victor. His dad gives some orders that Adam hesitates to carry out and Chelsea warns him about Victor yet again.

Luca moves forward with his plan to take Victor down while Adam schemes against Luca. Victor has enemies he doesn’t even know about working against him now. Phyllis Newman (Gina Tognoni) continues to work on her revenge plan against Victor.

Billy is neck deep in Phyllis’ plan and neither Jack Abbott (Peter Bergman) nor Victoria Newman (Amelia Heinle) have a clue what’s going on under their noses. Billy works hard to make things better with Victoria, but is now working against her with the internet deal.

Abby Newman (Melissa Ordway) spends more time with Max Rayburn (Jared Breeze) and has to set some boundaries. Stitch Rayburn (Sean Carrigan) keeps making things harder between them. All this and more on next week’s Y&R. Watch and check back with CDL daily for “The Young and The Restless” spoilers and news.