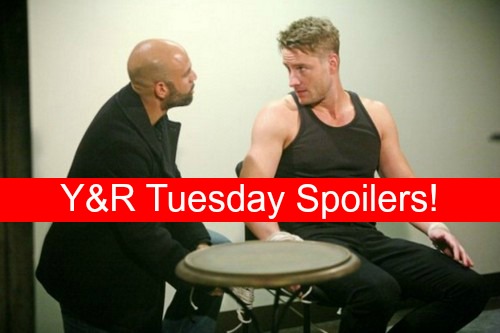 “The Young and the Restless” spoilers for Tuesday, January 19, tease that Luca (Miles Gaston Villanueva) will try to get to the bottom of the Marisa (Sofia Pernas) situation. In Monday’s episode, Luca is infuriated when he learns that Victor (Eric Braeden) arranged to trade Marisa for Adam (Justin Hartley). Now Luca intends on finding some answers.

In Tuesday’s preview video, Luca insists that Victor has covered his tracks and that’s why he needs to speak with him. Noah (Robert Adamson) will urge him to calm down, but it’s clear that Luca is fired up. He’ll be willing to do whatever it takes to get info out of Victor.

Elsewhere, Nick (Joshua Morrow) will be searching for the truth as well. Y&R spoilers say Nick will plead with Victor to tell him what he knows about Adam’s disappearance. Of course, Victor doesn’t know the whole story. He seems to think this is all about Marisa, but the girl mentioned in the ransom note is most likely Natalie (Mara McCaffray).

Everything should work out eventually, but there’s going to be total chaos in the meantime. Adam is missing, Marisa has been taken and Natalie is still wanted. This giant mess could mean bad news for all parties involved. Luckily, there’s someone who might be able to help. Dylan (Steve Burton) just became a detective and Chelsea (Melissa Claire Egan) will want to put his skills to good use.

“The Young and the Restless” spoilers say Chelsea will approach Sharon (Sharon Case) about securing Dylan’s assistance. Chelsea will indicate that Adam has possibly been kidnapped and she needs Dylan to figure out what’s going on. Sharon will undoubtedly be concerned about Dylan putting himself in danger. That’s just something Sharon will have to get used to.

If someone needs help, Dylan is typically first in line. Now that Dylan has been bumped up to detective status, he’s going to be playing the hero even more. Stick with the CBS soap for updates on Dylan’s attempt to pitch in.