The Young and the Restless (Y&R) Spoilers: Furious Sage Warns Dr. Anderson to Butt Out – Phyllis and Victor at War 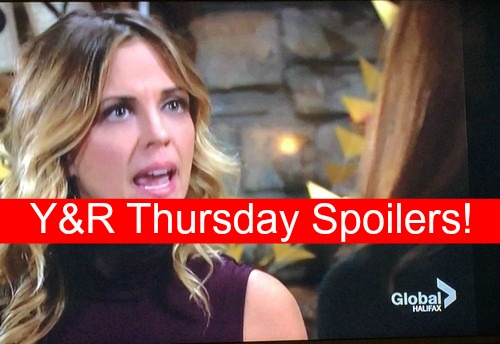 “The Young and the Restless” spoilers for Thursday, January 7, tease that Phyllis (Gina Tognoni) will once again have a big problem with Victor (Eric Braeden). These two always manage to end up going to war. In their latest quarrel, Victor will mention that he doesn’t mind watching Jack (Peter Bergman) and Phyllis squirm a little.

Phyllis will make it clear that she doesn’t appreciate whatever scheme Victor has in play. Could this have something to do with the new venture that Victor wants in on? Victor has been busy gathering information while Billy (Burgess Jenkins) is out of commission.

When it comes to business, Victor likes to take advantage of a good opportunity.

Elsewhere, it appears Dr. Anderson (Elizabeth Bogush) will finally go one step too far. We all knew she’d push someone to the limit with her meddling eventually. In Thursday’s Y&R preview video, Sage (Kelly Sullivan) shouts that Dr. Anderson isn’t her therapist and she isn’t her friend.

With that in mind, Sage will want Dr. Anderson to butt out of her life.

“The Young and the Restless” spoilers say Dr. Anderson will be troubled by Sage’s temper tantrum. If Dr. Anderson wants to continue her plot, she’ll need to find a sneakier way of carrying it out.

People are starting to get suspicious of why she’s so invested in the lives of Christian and Sully’s parents. It won’t be long until everyone realizes that Dr. Anderson is bad news.

Meanwhile, Mariah (Camryn Grimes) could have some suspicions of her own when Kevin (Greg Rikaart) surprises her with a birthday present. Mariah already seems to be wondering exactly where they stand. Kevin has arguably been sending out a few mixed signals lately.

Their last sexual encounter didn’t go over very well, but Mariah just can’t shake her feelings for Kevin. They shared a kiss on New Year’s Eve and now Kevin is handing over a thoughtful gift. Do Kevin’s feelings still run deeper than friendship, too? Stick with the CBS soap for updates on Kevin and Mariah’s attempt to figure things out.