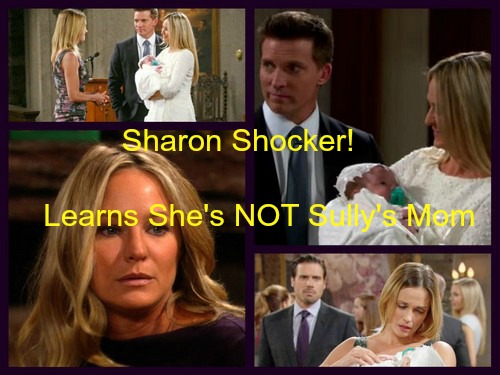 “The Young and The Restless” (Y&R) spoilers hint that Adam Newman (Justin Hartley) will frustrate wife Chelsea Newman (Melissa Claire Egan) with his hesitance to have another baby with her. In coming days, his resistance will turn to outright refusal to provide Connor a sibling.

This will hurt Chelsea deeply at a time when she’s already suspicious of Adam’s volatile behavior. With Adam forming a new clandestine partnership with Luca Santori (Miles Gaston Villanueva), Chelsea thinks he’s backsliding into his darker self and may blame that for his lack of interest in another child.

In fact, it’s Adam’s grief over the loss of his son Christian with Sage Newman (Kelly Sullivan) that is driving his refusal to father another child with Chelsea. Adam is in a really tough position here because he has to grieve in secret.

His internal grief looks to others like anger and acting out for no reason. Recently, Adam upset Sage with his passionate talk about Christian not having the chance to ever have birthdays or other milestones.

Sage thought he was prodding at her grief, but he was just expressing his own. Y&R spoilers indicate that Adam could open up soon to Sage about Christian being his son, not Nick Newman’s (Joshua Morrow). They have a history of keeping each other’s secrets so he may break down and confide in her.

This could allow Sage and Adam to grieve together as parents but will look to Nick and Chelsea like Sage and Adam are renewing their romance. “The Young and The Restless” spoilers also reveal that in coming weeks, Sharon Newman (Sharon Case) will find out something about baby Sully.

Sharon will get results of medical tests on Sully that make it clear that she has no biological tie to the baby. She may continue to keep that secret because she doesn’t want to lose another child and worries how it will impact her relationship with Dylan McAvoy (Steve Burton).

The upshot of all of this is, with Adam and Sage already growing closer over shared grief, they could bond even more with the return of their son. This will cut Chelsea even deeper because Adam refused to get her pregnant but now has a baby with Sage.

In fact, if Chelsea keeps pressuring Adam, he may snap at her which could leave her hurt and confused. Chelsea has invented the notion that Adam wants another baby because she saw him holding Sully at the Newman Christmas party.

Adam was thinking how he could have been holding his own son Christian if he hadn’t died. That wasn’t a moment of desire for a new baby with Chelsea – it was a moment of deep grief over the loss of his son with Sage.

What Chelsea saw as Adam pondering hope for the future was instead regret for the past and what he had lost, not what he might gain later. Chelsea’s misreading of Adam’s emotions could cause a deep rift between them that could break their marriage.

Plus, Victor’s constant prodding of Adam’s sore spot of losing Christian will only put Adam more on edge. If Chelsea keeps pulling while Victor is pushing, Adam could snap. What makes this harder too is that Sage and Nick are getting tons of sympathy from everyone in Genoa City.

In comparison, Adam is left alone with his sadness unable to tell anyone. And the one person who knows – Victor – is about as sympathetic as a tiger shark. What do you think Y&R fans, is Adam’s grief a cauldron ready to boil over? What will be the fallout from all of this?

Share your thoughts in the comments below and come back to CDL often for “The Young and The Restless” spoilers, news and more.