The Young and the Restless (Y&R) Spoilers: Ashley Pregnant For Real or Another Soapy Fake-Out? 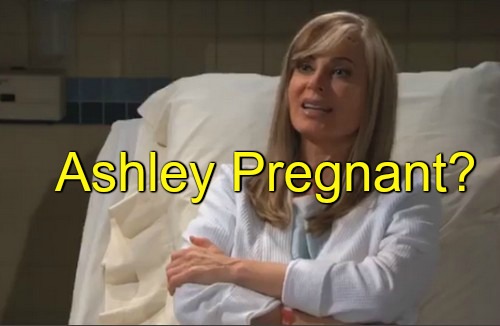 “The Young and the Restless” spoilers tease that Ashley (Eileen Davidson) will make a surprising statement to Dr. Neville (Michael E. Knight). Y&R’s latest promo shows Ashley informing Dr. Neville that she’s pregnant. Some people seem to think Ashley is indeed with child, but we’re not so sure. Promos are notoriously deceitful.

This could simply be a case of sarcasm and editing magic. We know that Ashley will begin feeling weak and Dr. Neville will take her to the hospital to get checked out. Stitch (Sean Carrigan) will insist that Ashley needs to have some tests done. Perhaps Stitch will suspect that Ashley is expecting. That could lead Ashley to mock her own situation by telling Dr. Neville the phony news.

There’s even a chance that something in Dr. Neville’s drugs could make Ashley have a false positive. Who knows what this unconventional doc puts in his newfangled concoctions? Regardless, Ashley is getting fed up with keeping her secret and constantly battling fatigue. She’s just ready to get better.

Hopefully, this will merely be a minor setback and Dr. Neville’s treatment will continue to improve Ashley’s health.

Of course, there’s always the possibility that Ashley could actually be pregnant, but it would be a rather bizarre move. After all, soaps rarely pass up the opportunity to show babies being made and we haven’t seen Ashley do the deed in a long time. When would Ashley have conceived a child?

Stitch was injured and was in no condition to have sex during the Top of the Tower fire. As far as we could tell, making out was the only thing going on in the blaze. Besides, that was back around Halloween and Ashley probably would’ve known by now if she had a baby on the way.

Ashley wouldn’t even talk to Dr. Neville about the kiss they shared, so it’s doubtful that they’ve had some clandestine encounter off screen. On top of all that, Ashley is getting pretty close to the cutoff age when it comes to soap pregnancies. It’s still within the realm of possibility, but we’d say don’t bet on it.

Bottom line, “The Young and the Restless” loves to throw tricky moments in their promos to keep us guessing. We don’t blame them. They have to give us a reason to watch. Speculating is half the fun! Stay tuned to see if Ashley’s pregnancy updates are a soapy fake-out.

There’ll be lots of X’s and Oh’s this week on @youngandrestlesscbs! #YR #CBSdaytime