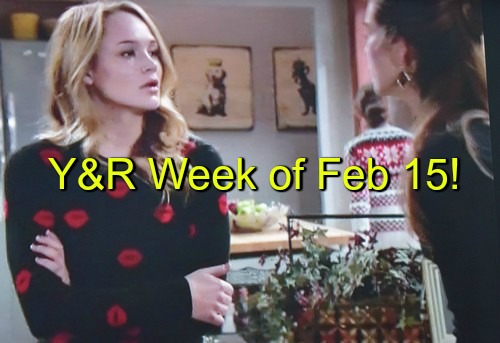 “The Young and The Restless” (Y&R) spoilers for the week of February 15 through February 19 assure dedicated fans episodes that will shatter beliefs and overturn the very fabric of Genoa City! Next weeks episodes reveal tons of romance, more confrontations, marriage trouble in more than one household, and a magical proposal.

A troubled marriage is on the mend as Cane Ashby (Daniel Goddard) and Lily Winters (Christel Khalil) meet up in secret and continue to pursue a rekindled romance. Also rekindling is Billy Abbott (Jason Thompson) and Victoria Newman (Amelia Heinle).

Billy turned down Victoria’s proposal because he has grander plans of his own. First, Billy goes to have a serious talk with Victor Newman (Eric Braeden). Billy tells Victor he’s going to marry Victoria again. Victor pledges not to interfere when he sees he’s serious and has new resolve.

Billy has to decide if revenge or Victoria is more important but he decides to keep on with the plan with Phyllis Abbott (Gina Tognoni) and Natalie (Mara McCaffray). Billy will set up an elaborate proposal for Victoria at the Top of the Tower.

Billy has other things on his mind in addition to romance. He confronts Chelsea Newman (Melissa Claire Egan) about why she was asking what he remembered. He still hasn’t recovered all of his memories from the accident and thinks she knows something.

Phyllis is also dead set on revenge and struggles to keep her plans secret from Jack Abbott (Peter Bergman). Phyllis warns Summer Newman (Hunter King) about Natalie. This is all part of the plan to make Natalie look like a con artist.

Meanwhile Ashley Newman (Eileen Davidson) has a setback and later she poses a problem for Abby Newman (Melissa Ordway) who is worried about her marriage. Abby tries to set some boundaries for Max Rayburn (Jared Breeze) after he walked in on her and his dad.

But Abby is worried that her relationship with Stitch Rayburn (Sean Carrigan) faces too many obstacles. Neil Winters (Kristoff St John) continues to struggle with sobriety and makes a big public scene. Hilary Curtis (Mishael Morgan) throws some shade his way.

Hilary decides she wants to be with Devon Hamilton (Bryton James) but he’s not certain he wants to go there. Soon she’ll have him in her bed, though. Hilary is back to her old scheming ways and won’t let anyone stand in her way.

Sage Newman (Kelly Sullivan) continues to be tormented with ongoing baby Christian nightmares. Late in the week, Adam has news for Victor that shocks him and Nick and Sharon Newman (Sharon Case) must come together to deal with a Noah Newman (Robert Adamson) crisis.

All this and more on next week’s Y&R. Don’t miss a moment and check back with CDL often for more “The Young and The Restless” spoilers and news.