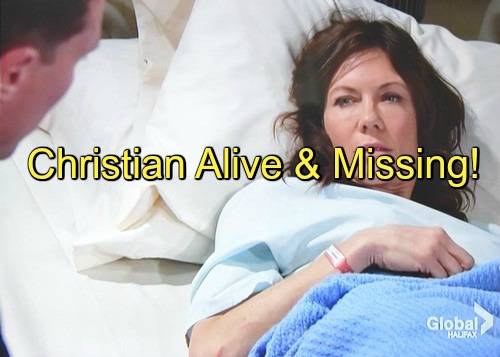 “The Young and The Restless” (Y&R) spoilers reveal that even though Genoa City’s top cop Paul Williamson (Doug Davidson) is ready to close the book on the Dr Anderson (Elizabeth Bogush) murder investigation, that doesn’t mean all is said and done. There’s more to discover about Christian.

Sage Newman (Kelly Sullivan) and Nick Newman (Joshua Morrow) are convinced there’s more to consider than Patty Williams (Stacy Haiduk) stabbing a doctor who tormented her. They will soon join forces with Dylan McAvoy (Steve Burton) to reopen the case and figure out why Dr A is dead.

When Sage (Kelly Sullivan) wakes from a nightmare about Patty cradling her dead son, will that send Sage back to the hospital to question Patty herself? Patty was trying to tell her something at Fairview before her they were interrupted.

In the nightmare, Patty was holding Sully and singing him to him. This is the first inkling that Sage has that Sully might be Christian – but she knows that’s an outrageous idea. Will she tell Nick what she dreamed or keep it to herself because it’s too outlandish?

Y&R fans know that Patty was wise to the fact that Sharon Newman (Sharon Case) wasn’t ever pregnant at Fairview, but does she know that Christian was the baby brought in to give to her? Patty may have been sneaking into the offices and reading files – she’s crazy, but not dumb.

Or she could have overheard Dr Anderson talking to one of her goons about the baby. It’s doubtful that Y&R will unveil all at once that Christian is alive and that he’s Sully. This will likely come in stages. And stage one is for Sage to become convinced that her son is still alive.

Dr Anderson was at the GC hospital a lot around the time that Christian was in NICU – is the next step to grill the NICU nurses? One of them helped take Christian away – they just need to find that woman and get her to confess.

If Dr Anderson was smart – and we know she was – she might not have let that woman know her ultimate plan so no one could give away her end game. In coming days, we’ll likely see clues from Patty cause Dylan to dig deeper into Dr Anderson and find out a connection between her and the baby.

But even when they find out their son is alive, Nick and Sage will likely assume that he’s missing and that Dr Anderson took him from them for some other purpose. It will likely be a while before they know that their son has been right under their noses the whole time.

In a recent interview with Michael Fairman of On-Air On-Soaps, Joshua Morrow said, “Christian is alive, and eventually he is going to come back to Nick and Sage.” Of course, Y&R fans know the baby is alive, but this gives us hope that their family will be back together eventually.

What do you think Y&R fans? How long will it be before Sage realizes that her nightmare was really a revelation and they start digging around in Christian’s death as well as Dr Anderson’s? Share your comments below and come back to CDL often for more “The Young and The Restless” spoilers.