The Young and the Restless Spoilers: Is Justin Hartley Leaving Y&R – Adam Newman’s Actor On NBC Primetime Series ‘This is Us’

BY Sean O'Brien on May 13, 2016 | Comments: 6 comments
Related : Soap Opera, Spoiler, Television, The Young and the Restless 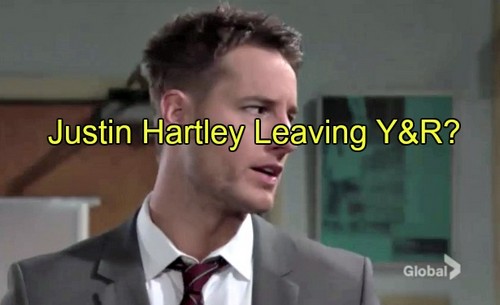 “The Young and The Restless” (Y&R) spoilers tease big sweeps action for Adam Newman (Justin Hartley) including his real-life girlfriend Chrishell Stause debuting as troublemaker Bethany. But does Justin Hartley have one foot out the door now that he’s got a primetime series on NBC?

Y&R showrunners had promised to be flexible with Justin Hartley on outside projects. He had a run on Mistresses on ABC and made a rom-com called Another Time now in post-production slated for a 2016 release, but this latest series is a full-time gig in a starring role on NBC.

News broke recently (Michael Fairman asks how this huge new job will affect Justin’s availability for Y&R) that the Dan Fogelman-helmed series starring Hartley got the greenlight as one of the most promising pilots shot recently. The original title of the show was “Thirty Six” but has now been changed to “This is Us.”

Justin Hartley is one of the three named stars of the project alongside singer turned actress Mandy Moore (A Walk to Remember, Red Band Society) and Milo Ventimiglia (Heroes, Gilmore Girls). Fogelman has a history of hit making (Galavant, Bolt, Tangled), so this show could be a big deal.

Will Y&R be able to work around a major commitment like that, particularly on a rival network? Or does this mean Hartley will have to leave The Young and the Restless? Could the network sideline Adam Newman with a plot that sends him out of town – or do Y&R fans need to brace themselves for another recast?

The NBC show “This is Us” centers on the three main characters Rebecca (Mandy Moore), Jack (Milo Ventimiglia) and Kevin (Justin Hartley) that share the same birthday. Rebecca and Jack are married and expecting triplets and Kevin is a sexy TV actor tired of his bachelor life.

These lives intersect in this drama-comedy. Other actors listed include Alan Thicke, Chrissy Metz, Kelechi Watson, Chris Sullivan, Sterling K Brown (The People vs OJ Simpson), and Ron Cephas Jones. The pilot was a hit and now NBC has been ordered to series.

What do you think fans of “The Young and The Restless”? Do you think Hartley can balance the roles of Adam Newman and Kevin? One hopeful sign is that “This is Us” is slated to shoot in LA rather than far from the set of Y&R so perhaps the shows can split his time.

Then again, given Hartley’s long history of non-soap work, he may be packing his bags to leave CBS for good, but let’s hope not. What do you think Y&R fans? Do you think Harley might leave the CBS soap? Do you think another recast of Adam Newman is coming?

Share your comments below then come back to CDL for more “The Young and The Restless” spoilers and news.