BY Heather Hughes on January 10, 2016 | Comments: one comment
Related : Soap Opera, Spoiler, Television, The Young and the Restless 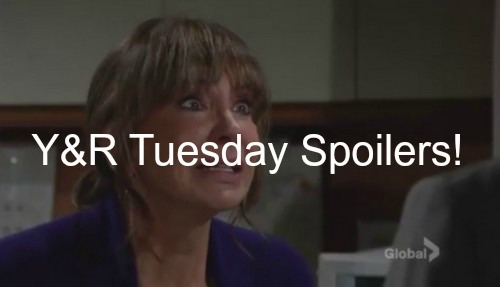 “The Young and the Restless” spoilers for Tuesday, January 12, tease that Lily (Christel Khalil) and Hilary (Mishael Morgan) will have tense showdown. Since Hilary makes love with Neil (Kristoff St. John) in Monday’s episode, there’s a good chance there’s going to be some fallout.

Devon (Bryton James) will be probably be moping around after witnessing the steamy encounter.

Lily will decide that Hilary deserves a piece of her mind. “The Young and the Restless” spoilers say Lily will point out that she thought Hilary had changed. Hilary has caused plenty of drama in the past and it seems Lily will believe her current behavior is so typical.

Nevertheless, Hilary is a woman who knows what she wants. It’s obvious that Hilary’s desire for Neil is her only focus at the moment.

Meanwhile, many of the Abbotts will fear the end is near for Billy (Burgess Jenkins). Victoria (Amelia Heinle) will agree that this is what Billy wanted. In Tuesday’s preview video, Victoria insists that Billy’s wishes were clear. She’ll add that a life on machines is no life at all.

Jill will want to hold out hope that they’ll hear good news soon. When Jill pleads with Jack to let Billy live, Jack tell her to stop acting like this is his decision. Billy left Jack in charge of carrying out his final requests. Jack will believe that he has an obligation to fulfill Billy’s desires. Jill will be heartbroken by the way everyone is just giving up.

Fortunately, Y&R spoilers indicate that Billy isn’t going to die. It sounds like a miraculous recovery is in Billy’s future. Victoria will be thrilled to have one last opportunity to be with her love. Things will start to turn around later this week.

When Billy eventually wakes up, you’ll notice some updates to his look. Stick with the CBS soap to watch Jason Thompson’s debut as a recuperating Billy.