‘The Young and the Restless’ Spoilers: Justin Hartley Confirms Leaving Y&R, Focusing on This Is Us – Will He Return? 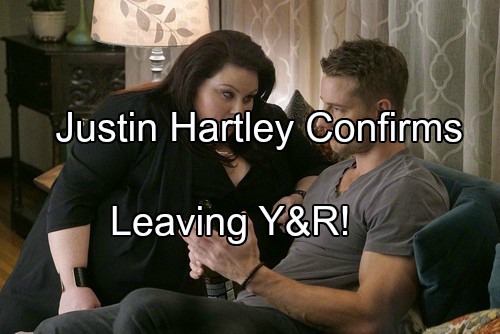 The Young and the Restless (Y&R) spoilers tease that Justin Hartley’s (Adam) stint at the CBS soap could be coming to a close. In a new interview with Michael Fairman, Hartley opened up about his new series and how it could affect his future with Y&R. His comments weren’t exactly reassuring.

Hartley is currently filming a primetime drama for NBC called This Is Us. You can expect that project to be Hartley’s focus moving forward. “I’m going to have to do this for a little bit here,” said Hartley. “There’s definitely a break (at Y&R). I don’t know if I can (do both shows). I try to stay out of that, and gladly don’t wear that hat.”

It sounds like Adam won’t be around much in the coming months on The Young and the Restless. Since Adam is such a key player in Genoa City, the network may not like the idea of putting him on the backburner forever. That’s especially true if Hartley is helping rival networks succeed. He also has a role on ABC’s Mistresses.

If trailer views are any indication, NBC could have a hit on their hands with This Is Us. The preview has been watched on social media over 90 million times. It’s actually Facebook’s most-viewed trailer in history for a new show. There’s obviously plenty of buzz surrounding this complex drama and its great cast.

Plus, the show is getting a coveted slot following The Voice for its debut. This Is Us will later get some schedule tweaks, but the benefits of initially following NBC’s popular reality program could be huge. That’s a nice lead-in to get people hooked.

In other words, This Is Us could jumpstart Hartley’s career outside of soaps and Mistresses. The Young and the Restless could be looking for a new Adam before long. Hartley certainly seems to think of his new gig as the top priority right now.

“I knew I needed to do everything I could possibly do to try to get this part,” Hartley said. “This show is so special. The episodes I’ve read are just getting better, if that’s possible. I’m in love with it, so I knew I had to do it.”

Many Y&R viewers will be disappointed if they have to say goodbye to Hartley’s version of Adam. Everyone was nervous when Michael Muhney was fired and a recast had to be brought in. Fortunately, The Young and the Restless managed to find the perfect man for the job. Hartley has really made the role his own.

Now the studio could be preparing for a new Adam hunt. That could prove to be a tough search. Of course, there’s always the chance that they could kill the character off. There just isn’t a satisfying solution to this problem. Let’s not forget that CDL reported exclusively that Aiden Turner was in the CBS studios doing a screen test with Melissa Claire Egan in May. We’ll give you updates if any official news emerges about Hartley’s departure and his replacement

So Y&R fans, what do you think about the situation with Justin Hartley? Is he ready to bolt from The Young and the Restless? Will the success of This Is Us prompt his exit from the CBS soap? Voice your opinion in the comments below and don’t forget to check CDL often for the latest Young and the Restless spoilers, updates and news.