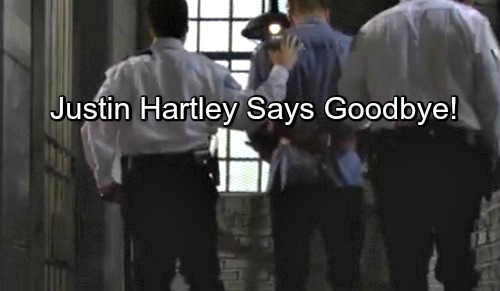 The Young and the Restless (Y&R) Spoilers has detailed Justin Hartley’s upcoming role on NBC’s prime time fall series This Is Us. The actor, known to daytime fans as Adam Newman, has also announced that he’ll be taking a break from Genoa City sets due his nighttime obligations. With that in mind savvy Y&R viewers are wondering if Hartley just delivered his farewell speech, in character, inside Walworth prison.

A recent, terrific two-shot showed Hartley and Joshua Morrow (Nick Newman) meeting in the prison visitor’s room. The extended scenes were the most emotional each character has had with the other since Victor Jr. first arrived in Genoa City many years ago. Adam’s heart-wrenching request, that Nick become a father to Connor (Gunner and Ryder Gadbois), was powerful and potentially revealing.

The Young and the Restless spoilers’ fans possess gut instincts where this genre is concerned. While nothing is ever fully certain, educated conjecture, combined with public information, allows devotees to project the evolution of current arcs. In this instance, Hartley acknowledged that his work for NBC will require a break from Y&R’s filming schedule.

So, it’s possible that he’s shot many advanced scenes and will remain a sporadic presence on the screen indefinitely. However, other, more likely options exist.

A casting call for a middle-aged male, who could be Adam’s replacement, was recently made, as The Young and the Restless spoilers detailed. But, assume that actor won’t be filling Hartley’s shoes, either temporarily, or on a permanent contract basis. It then remains possible that Adam will simply be written out of the script because this character will escape from prison.

That plausible storyline would enable Hartley’s absence to be addressed internally, while also keeping the star’s dressing room door open for his projected return in approximately six months. If he subsequently opts to end his run on the show, recast efforts could always be made moving forward.

Pure speculation of course. And, Hartley’s exit would be a significant loss, especially considering his acceptance by the audience. But, this is soap and that’s how the entertainment business works.