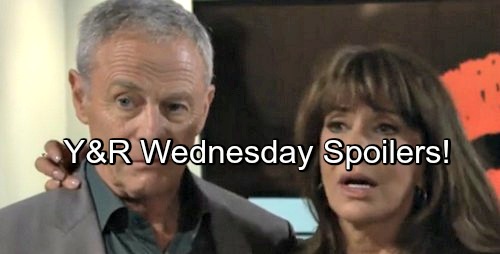 The Young and the Restless (Y&R) spoilers for Wednesday’s episode, August 24, tease that lies and deep feelings will stir up trouble on the CBS soap. For starters, shocking information will come to light about Neil’s (Kristoff St. John) relationship with his mom. Lily (Christel Khalil) will continue to annoy Neil about his parents and Hilary (Mishael Morgan) till take notice. She’ll decide to let Lily in on a secret.

In her suite, Hilary will pass along letters that Neil tossed in the trash during their marriage. Neil’s mom reached out to him many times. She wrote to Devon (Bryton James), Lily and the children as well. Lily will be stunned by Neil’s deception. She’ll give Cane (Daniel Goddard) and Devon updates on what Neil has been hiding.

Hilary will confront Neil about why he still refuses to forgive his mother. Devon will also have some questions about Neil’s decision to keep secrets. Neil will insist that the past needs to stay buried. He’ll think all of this will just lead to more sorrow for their family.

Meanwhile, Victoria (Amelia Heinle) will mull over the time she spent with Travis (Michael Roark). She’ll talk to Phyllis (Gina Tognoni) about their special connection. Phyllis will get lost in her own little world. She’ll fantasize about marrying Billy (Jason Thompson) and dancing at their wedding. When Jack (Peter Bergman) cuts in, it will bring Phyllis back to reality.

Later, The Young and the Restless spoilers say Jack will ask Phyllis to share an actual dance at the athletic club. Phyllis will recall her Billy fantasy and try to break away. Jack will want Phyllis to follow his lead and live in the moment. When Phyllis suggests that she would enjoy being a bride again, Jack will give her a passionate kiss.

At Brash and Sassy, Billy will get fed up with Jill’s (Jess Walton) controlling nature. He’ll finally decide to quit, but Cane will tease him until he decides to stick around. Colin (Tristan Rogers) will wonder what all the fuss is about. Billy will urge Colin to keep Jill from interfering, especially in his love life.

At the mansion, Y&R spoilers say Colin will question Jill about what she’s not divulging. He’ll suspect Jill has acquired some important knowledge and he’ll demand to hear it. Jill had better keep her mouth shut. If Colin finds out about Phyllis and Billy’s affair, it will only lead to bad news.

At Victoria’s place, Billy will stop by and admit that Colin is staying at the mansion with Jill. Victoria will state that Billy is welcome to stay with her. Billy will quiz Victoria about her trip to Mexico and she’ll confess that she wanted to stick around. Billy will wonder what stopped Victoria. He could’ve taken the kids and helped out with her duties at work.

Billy will believe that fear is holding Victoria back. She’ll point out that things are complicated. Victoria will drop some hints about Billy’s new woman and suggest that he must be able to relate. Billy will ask if Victoria and Travis made love while she was away. Victoria will acknowledge that they did, but it just made everything more difficult.

Victoria will decide to get Billy a pillow and some blankets. When she returns, Billy will be long gone. It looks like that sex chat was too hot to handle. Billy appears to be caught between his former flame and the latest object of his affection. Unfortunately, Billy can’t have either one of them at the moment.

Victoria is focused on Travis and Phyllis is trying to repair her relationship with Jack. Will Phyllis or Victoria eventually drift back toward Billy? Stay tuned to see what the future holds.