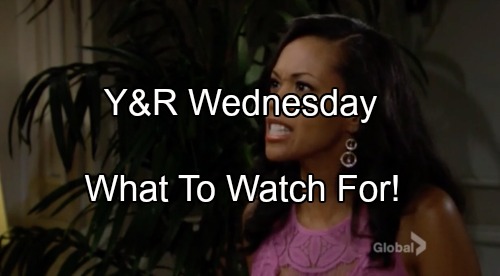 The Young and the Restless (Y&R) spoilers for Wednesday, August 24, tease that Hilary (Mishael Morgan) will go on the warpath again. Neil (Kristoff St. John) will be the target of her wrath this time. Of course, there’s always going to be some bad blood for these two. They’ve been trying to put the drama of the past behind them, but issues keep popping up to fuel the flames.

Hilary will get into a fight with Neil about his secrets and lies. She’ll grill Neil about his constant deception. Devon (Bryton James) will likely get caught in the conflict soon enough. He usually ends up stuck in the middle of Hilary and Neil’s showdowns.

Meanwhile, Victoria (Amelia Heinle) will come home to total chaos. Phyllis (Gina Tognoni) will insist that Victoria will wish she’d stayed in Mexico when she hears the latest news. In reality, part of Victoria already wishes she was sailing away with Travis (Michael Roark). Unfortunately, they just couldn’t reach an agreement on their future.

Since Travis wouldn’t return to Genoa City, Summer’s (Hunter King) wedding is still on track. Y&R viewers probably shouldn’t buy Phyllis’ supportive act. Phyllis may be plotting another attempt to stop Summer’s marriage to Luca (Miles Gaston Villanueva). Victoria has been trying to help out, but she has other matters to worry about besides Summer’s doomed love life.

The Young and the Restless spoilers suggest that Billy’s (Jason Thompson) announcement could shake things up at Brash and Sassy. Jill (Jess Walton) has been pushing Billy’s buttons ever since she strutted back into town and took control of his company. She’s been shoving Billy toward Victoria every chance she gets.

It appears Billy will decide he’s had enough of his overbearing mother. Wednesday’s preview video shows Billy yelling, “Mother, you know best! You don’t need me just like I don’t need you, so I quit!” Jill will stand there in shock. Luckily, Colin (Tristan Rogers) will arrive in Genoa City on Wednesday. Maybe he can offer some comforting words.

In addition, Colin will wonder why Jill was so determined to make Billy and Cane work together. Jill will be on the hot seat as she deals with Colin’s suspicions, but she may ignore his concerns. Jill needs to gather her thoughts and concoct a new plan.
Elsewhere, Billy will meet up with Victoria. They’ll have a deep discussion about the situations they’ve been facing. This chat could bring them closer, but it could create a few complications, too.

Speaking of complications, Jack will run into some when tries to turn the romance up a notch with Phyllis. It seems Phyllis’ mind will wander as Jack pushes her to focus on love. Jack will quickly sense that something is off.