The Young and the Restless Spoilers: Nick Vows to Be Father to Connor, Sets Up Chelsea Affair – Bethany Search Continues 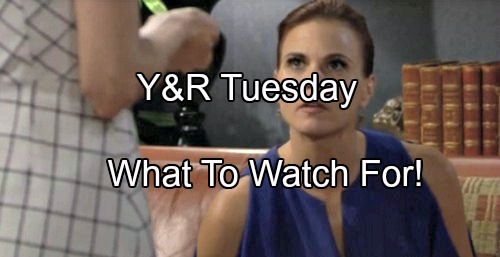 The Young and the Restless (Y&R) spoilers for Tuesday, August 23, tease that Adam’s (Justin Hartley) decision will stun Chelsea (Melissa Claire Egan). He’ll stick with his guilty plea and Chelsea will try to protest. The judge will order Chelsea to take her seat. He’ll quickly announce that Adam will be sentenced tomorrow.

Nick (Joshua Morrow) will track Victor (Eric Braeden) down outside the courtroom. He’ll rant about Victor being the reason Adam is in this position. Nikki (Melody Thomas Scott) will insist that Victor had nothing to do with it. Victor will find Michael (Christian LeBlanc) and blame him for letting Adam plead guilty. Chelsea will be livid that Victor has the nerve to hold anyone else responsible for this mess.

At the state pen, Nick will arrive to see Adam. They’ll share an emotional conversation about Connor’s (Gunner and Ryder Gadbois) future. Adam will want a father for his son. He’ll ask Nick to step up for Connor’s sake. Nick will think Adam can still be involved in Connor’s life, but Adam won’t want to do it from behind bars. He won’t believe it’s fair to Connor.

Nick will wonder why Adam chose him over Jack (Peter Bergman). Adam will suggest that Connor needs a Newman to watch over him. Nick knows how to handle Victor’s drama and he can guide Connor down a better path. Adam will state that they both would’ve wanted that for Christian, too.

Nick will question why Adam mentioned Christian, but his brother will claim he’s just trying to connect with him as a dad. Adam will tear up and urge Nick to make this vow. Nick will say he’d be honored to be Connor’s father figure.

Unfortunately, Adam may regret this request if Nick starts cozying up to Chelsea. The Young and the Restless buzz hints that it may happen. Nick and Chelsea could become a pairing while Adam is stuck in the slammer.

In the meantime, Adam will fire Michael and prepare to serve his new prison sentence. At the hospital, Stitch (Sean Carrigan) will give Dylan (Steve Burton) and Abby (Melissa Ordway) updates on the guard’s condition. He’s on life support and keeps getting worse. Adam could be charged with murder soon.

Dylan will be convinced that Victor set Adam up and Stitch will agree that it seems likely. Abby will decide to get to the bottom of it herself. She’ll head over to Newman Enterprises for a chat with Victor. Vic won’t admit anything when he’s grilled. He’ll simply assure Abby that he’s doing everything he can to assist Adam.

As she’s leaving, Abby will speak with Nikki privately. She’ll wonder if Nikki really buys that Victor is innocent. Nikki will continue to stand by her husband, but she’ll obviously have some doubts. Once Nikki returns to Victor’s office, she’ll demand the truth. Victor will confess that everyone makes mistakes sometimes.

Nikki will be horrified by the confirmation that Victor framed Adam, but she’ll believe Vic still has a chance to save his son. Victor will be grateful for Nikki’s support. They’ll share a hug and Victor will insist that he can undo the damage.

Other Y&R spoilers say Chloe (Elizabeth Hendrickson) will listen to Chelsea’s latest outburst. Chelsea will gripe that the person who set Adam up is just as guilty of the assault. After Nick delivers news on his visit with Adam, Chloe will accompany Chelsea upstairs. Nick will sit with Connor and suggest that everything is going to be fine.

At the police station, Dylan will be adamant that they have to find Bethany (Chrishell Stause). Kevin (Greg Rikaart) will worry about what might happen if they take Victor down. Nikki’s world could be torn apart. Stay tuned to the CBS soap to see if Victor and Nikki’s relationship will survive.