The Young and the Restless Spoilers: Adam Convicted for Prison Guard’s Death In Ironic Twist? 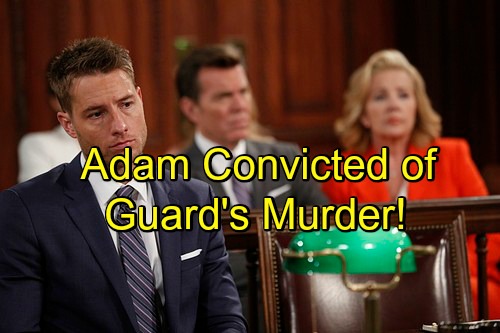 The Young and the Restless (Y&R) spoilers has fully detailed Adam’s (Justin Hartley) odyssey. Framed by his demented father for the invented murder of Constance Bingham (Sally Kellerman) and unjustly sentenced to 30 years in the cooler.

Then, on the same day that the Genoa City Police Department located needed evidence to exonerate him, a despondent, starved, hallucinating Adam went berserk. He beat and strangled a Walworth prison guard, who’s now in a coma.

Might an ironic plot twist see Y&R’s most tortured character rightfully convicted for murder if that man dies?

Victor (Eric Braeden) honestly didn’t want Adam to go to prison, as most fans of The Young and the Restless spoilers would testify to in court. The Moustache simply wanted to teach his son a lesson by scaring him with a show trial.

Then, at the last minute, the real pages of Sage’s (Kelly Sullivan) diary were supposed to appear, thereby forcing the judge to rule that Adam was innocent. However, Chloe (Elizabeth Hendrickson) defied Victor by withholding Sage’s longhand laments, which put the perceived killer of Delia (Sophie Pollono) behind bars.

From the Michael Muhney switch through present day, Hartley has proven to be the right recast. Overwhelming majority opinions, held by The Young and the Restless spoilers’ fans, indicates that this CBS steamer’s hiring decision was a success.

But, Hartley’s moonlighting gig with NBC (with a wink toward the classic 1980’s Bruce Willis and Cybil Shepherd ABC series intended) has created a storyline challenge for Y&R executive producer Mal Young.

Genoa City devotees should ask themselves if Adam’s self-imposed hunger strike and subsequent bludgeoning of an illusion he thought was Victor has been created to give the writing staff plot flexibility? It’s now become possible that the Adam character will be exonerated on the original set of murder charges, but face at least 6-10 years in prison for assaulting a prison guard.

Unless that Walworth employee dies, in which case Adam will almost certainly be convicted for a murder he actually committed!