‘The Young and the Restless’ Spoilers: Chloe Warms Up to Kevin, Relationship Resumes – Will Ugly Secret Wreck Reunion? 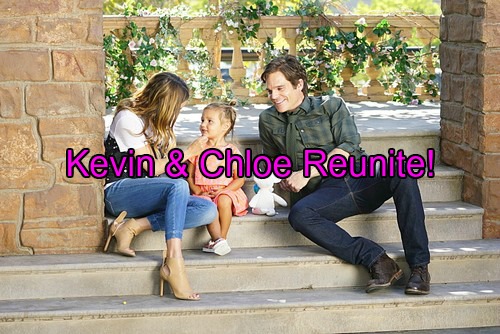 The Young and the Restless (Y&R) spoilers tease that Kevin (Greg Rikaart) will continue to support Chloe (Elizabeth Hendrickson). Regardless of how she feels about him, Kevin wants Chloe to know he’s there for her. It seems Kevin will finally convince Chloe to drop her guard slightly.

Y&R spoilers say Chloe will open up to Kevin about her struggles. She’s been through a lot over the last few years. She’s undoubtedly felt very alone. When Chloe left town, she wanted a child to replace Delia (Sophie Pollono). Chloe stole Billy’s (Jason Thompson) sperm to make her dream a reality.

Related: Victoria Belongs With Billy or Travis? Vote in Our Poll!

We don’t know if Chloe actually used Billy’s sample or if she got pregnant the good old-fashioned way. It’s possible that the recent DNA test was tampered with. This child could be Kevin’s after all. Y&R could even bring in another character as the father. It’s tough to say what twists they have in store.

Whatever the case, having Bella (Cali May Kinder) has brought out some strong emotions for Chloe. Several Young and the Restless characters have mentioned how much Bella looks like Delia. Every time Chloe gazes at Bella, she’s reminded of her loss. That’s probably something Chloe didn’t count on.

Of course, Chloe loves Bella and wants the best for her. Her resemblance to Delia has simply been another obstacle for Chloe to overcome. Perhaps we should cut Chloe a little slack for her revenge against Adam (Justin Hartley). The grief she’s experienced is enough to drive any mom over the edge.

Plus, Victor (Eric Braeden) was tossing around some heavy threats. He roped Chloe into this. Luckily, Chloe is now focused on a clean slate. She handed over the diary pages and she’s hoping that her role in the scheme will stay under wraps. Chloe may also have a change of heart about Kevin. She’s been noticing how great Kevin is with children.

Chloe suggested that Bella deserves a happy home and family like Delia had. Even though Chloe isn’t wild about Kevin, she can surely picture him as a stable and loving father. Chloe might be willing to give Kevin another shot based on that alone.

If they get back together, Chloe might allow herself to fall for Kevin again. Unfortunately, Chloe’s secret could present a problem. The ugly truth usually comes out on The Young and the Restless. What happens if Chloe builds a life with Kevin and he finds out she’s been lying about working with Victor? Would Kevin leave her or stay for Bella’s sake?

It’s unclear how Mariah (Camryn Grimes) will fit in this plot moving forward. If Kevin and Chloe reunite only to break up, maybe Mariah will be waiting as Kevin’s backup. In the meantime, Y&R might want to think about giving Mariah a new man. She deserves the chance to do something besides pine for Kevin.

It sounds like interesting developments are coming up for this love triangle. We’ll give you updates as more news emerges. Stay tuned and don’t forget to check CDL often for the latest Young and the Restless spoilers, updates and news.