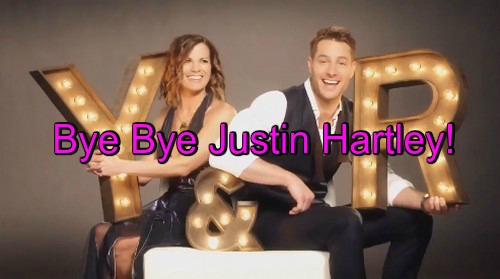 The Young and the Restless (Y&R) Spoilers readers know that Justin Hartley has begun working on NBC’s new nighttime series This Is Us. They also know that this new job will impact his availability to work on the CBS’ daytime series that he’s starred in since 2014. Savvy viewers know that’s why current storyline developments have created a variety of paths for his character, Adam, to take.

After rejecting his wife and son, Adam also stopped eating. He began having delusions and attacked a compassionate prison guard who merely brought a food tray into his cell. Of course that can happen when someone’s mind projects Victor Newman (Eric Braeden) into the Walworth employee’s body.

The Young and the Restless spoilers fans will surely remember the sight of The Moustache in his white guard uniform, baiting Adam, claiming Chelsea (Melissa Claire Egan) was moving to France, along with Connor (Gunner and Ryder Gadbois), to be with her new boyfriend. That hallucination broke this fragile inmate’s will, after which he attacked the man he thought was his father.

Adam’s newest legal problem could result in additional jail time, especially since he pleads guilty to assault after learning the guard slipped into a coma on the Monday, August 22 episode. That point is important because Dylan (Steve Burton) and Paul (Doug Davidson) found evidence within the same episode that should exonerate him.

The acquisition of Sage’s (Kelly Sullivan) real diary pages provides the proof need to likely have all murder charges dropped, thus freeing Adam from a just-started 30-year prison sentence. Sadly the assault on the prison guard changes everything.

As it stands now, Hartley has either filmed a variety of advanced scenes that will keep him in the daytime picture, sporadically, throughout the fall and winter, or he’ll be temporarily replaced by another actor who’ll fill his role until work on Season 1 of This Is Us concludes. Neither Justin Hartley, nor Y&R, has commented on the actor’s status but Justin made it super clear in a recent interview that he can’t do both jobs – and that This Is Us is MORE important to him than Y&R.

So, it appears as though no permanent decisions have been made by either party regarding his spot in the cast, or at least none that have been released to the public. The Young and the Restless spoilers will continue tracking the latest developments as they relate to Hartley’s fluid acting situation and deliver the critical news to valued readers as soon as official announcements are made.