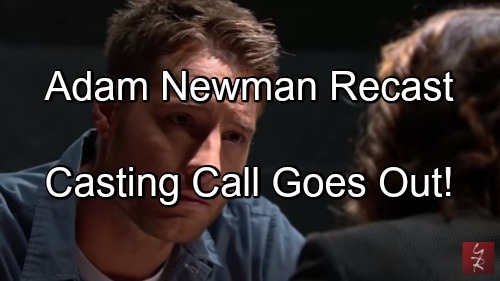 The Young and the Restless (Y&R) spoilers tease that the CBS soap may be on the hunt for a new Adam Newman right now. Justin Hartley’s role on the NBC primetime series, This Is Us, has left many viewers wondering about Adam’s fate at Y&R. Hartley says he’ll try to do both shows, but let’s be realistic about this. It’s doubtful that Hartley can manage two leading roles on rival networks.

Naturally, most actors opt for primetime over daytime when given the chance. With that in mind, we could be hearing about Hartley’s departure any day now. If so, we’re going to need someone to fill his shoes. The Young and the Restless obviously hates to lose Hartley, but Adam is a prominent character in Genoa City. Regardless of who’s playing him, Adam needs to be around.

A recent casting call certainly appears to be a disguised Adam recast. Y&R is looking for a Caucasian man in his mid-30s to join GC’s other hunks. They call him “Dean,” but we’d say this could be our new Adam Newman.

The rest of the description also backs up the idea that this is the Adam recast. Soaps in Depth notes that this character comes from a wealthy family and he’s witnessed the terrible consequences of greed. He’s tried his best to go against the grain and fight the corruption of his background.

That definitely lines up with Adam’s point of view. He’s constantly trying to settle down with Chelsea (Melissa Claire Egan) and live a quiet life. Adam wants to break away from Victor (Eric Braeden) and the dangerous Newman dynasty, but he can never seem to pull it off.

Of course, Adam could come out of prison with renewed determination. He’ll may decide that he has to find a way to rise above the mentality of his father. Adam has been through so much over the last few years. He’s made some mistakes, but he’s got a kind heart deep down.

Adam adores Chelsea and Connor (Gunner and Ryder Gadbois) more than anything in this world. “Chadam” is a popular pairing and Y&R will want to keep that love alive. It’s often difficult for fans to accept recasts, but they usually warm up to them over time.

People learned to enjoy Hartley’s portrayal of Adam after Michael Muhney’s firing. Viewers can get used to the next Adam, too. Still, The Young and the Restless should be careful with this search. They need someone who’s a great fit as well as someone who won’t bolt to primetime in a year or two. Recasts are fine occasionally, but there’s no need for things to become excessive.

At the moment, the CBS soap is apparently stalling so they figure this mess out. Adam was all set to get his freedom until he hallucinated and attacked a prison guard. Now he’s facing assault charges and will remain behind bars. Poor Adam just can’t win!

If a departure announcement is imminent for Hartley, that could actually mean good news for Adam. Once Y&R has the opportunity to bring someone else on board, they can turn the situation around for the unlucky Newman. We’ll give you updates as details become available. Stay tuned and don’t forget to check CDL often for the latest Young and the Restless spoilers, updates and news.