The Young and the Restless Spoilers: Guard Slips Into Coma, Adam Pleads Guilty to Assault – Victor Hires Leslie To Save Son

BY Heather Hughes on August 19, 2016 | Comments: one comment
Related : Soap Opera, Spoiler, Television, The Young and the Restless 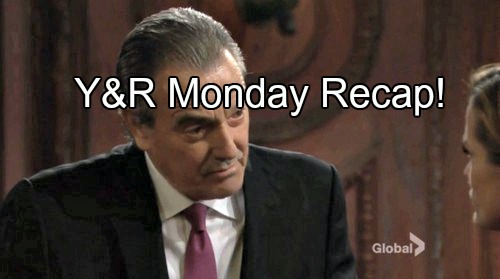 The Young and the Restless (Y&R) spoilers for next week’s new episode on Monday, August 22, tease that Travis (Michael Roark) will urge Victoria (Amelia Heinle) to reconsider his offer. He’ll want Victoria to come away with him so they can live a beautiful life together. Travis will believe there are plenty of memories to be made with Victoria and her kids.

Victoria just won’t be able to uproot her family like that. She’ll ask Travis to come back with her instead, but he won’t go for it. They’ll agree to simply remember what they’ve shared and move on. Victoria will board a plane and head home. Once he’s alone, Travis will notice that Victoria moved the picture he kept of her.

Travis will look wistful as he prepares to set sail again. The Young and the Restless spoilers hint that Travis will pop up in Genoa City pretty soon. We all know Travis won’t be satisfied with just a little taste of his love. Keep watching Y&R to see if Travis will save the day after all.

In the meantime, Billy (Jason Thompson) will be concerned when he gets updates on Victoria’s mission. Phyllis (Gina Tognoni) will wonder if Billy is jealous, but he’ll think maybe she’s the green-eyed monster. As they argue, a call will come in from Victoria. She’ll admit that she couldn’t talk Travis into returning.

Phyllis will walk out without giving Billy the news. It seems envy is creating some tension for these two. Elsewhere, Summer (Hunter King) will listen to more of Luca’s (Miles Gaston Villanueva) lies. The smooth Santori will insist that he couldn’t locate Travis. Summer will fear that Travis could make a surprise appearance and come after Luca.

Jack (Peter Bergman) will arrive and Phyllis won’t be far behind. Summer will be stunned when her mom voices her support. Phyllis won’t really be on board with Luca and Summer’s marriage, but she’ll respect her daughter’s decision. Summer will thank Phyllis with a hug.

It’s hard to believe Phyllis is being genuine here. You can bet that she’ll still take Luca down if she has the chance. Meanwhile, Victor (Eric Braeden) will try to help Adam (Justin Hartley) out of his current jam. He won’t approve of Michael (Christian LeBlanc) handling this case.

Instead, Victor will turn to Leslie (Angell Conwell) as he works to free his son. At the state pen, Chelsea (Melissa Claire Egan) will tell Adam that the guard he attacked on this week’s episode is in critical condition. Things look bleak, but Chelsea won’t want Adam to give up.

Later, Michael will visit Adam and suggest that he needs to plead not guilty by reason of insanity. At the penthouse, Kevin (Greg Rikaart) will be surprised when he hears about the attack from Chloe (Elizabeth Hendrickson). She’ll say she wants to be at Adam’s arraignment. Chelsea will walk in and discourage the idea, but Chloe will persist.

Kevin will point out that Chloe just wants to help Chelsea get through this. The Young and the Restless spoilers say they’ll all head to the courthouse where Michael will argue with Victor. Nick (Joshua Morrow) will eventually stop their fight and Michael will get Adam ready for court. He’ll admit that the guard slipped into a coma.

Adam will struggle as he experiences flashbacks of the brutal ordeal. When the judge asks how he pleads, Adam will hesitate. Michael will urge him to stick to the plan, but Adam will change his mind. He’ll insist on pleading guilty and accepting the consequences.

Y&R fans can expect some shocking moments as Victor tries to fix the destruction he caused. It sounds like Victor will be facing an uphill battle. Stay tuned and don’t forget to check CDL often for the latest Young and the Restless spoilers, updates and news.