The Young and the Restless Spoilers: Adam Finds Bethany – Proves Victor and Chloe Framed Him For Murder 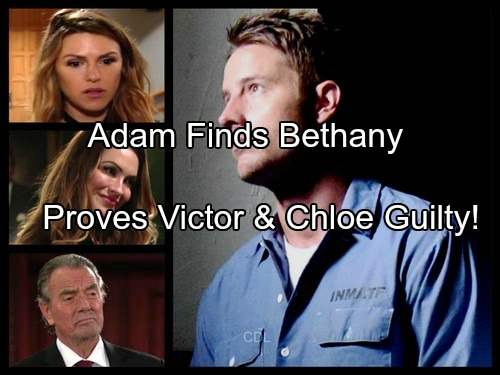 Because that evidence will free him, Adam will regain the ability to pursue his framers. But, what will he do when he learns that the bane of his existence, Victor, and arch nemesis, Chloe (Elizabeth Hendrickson), conspired to frame him for murder?

Adam doesn’t overlook anything. Even though he has a beautiful wife and young son who love him, choosing to take the philosophical course isn’t in his genes. No, Adam is angry and wants to make people pay for having wronged him. Fans of The Young and the Restless spoilers know that’s what Newman’s do.

Victor knew that Chloe had leverage over him. That’s why he moved to gain the upper hand by threatening to take Bella (Cali May Kinder) away from her. He also agreed to pay Bethany (Chrishell Stause) $3 million dollars in return for allowing herself to be setup as Adam’s framer. Why she would have done that remains to be seen. Adam won’t let that strange fact die.

Bethany is believed to have left the country by plane. After leaving Newman Towers with her duffel bag full of Benjamin’s, she apparently took a flight to a country that doesn’t have an extradition treaty with the United States.

However, her desire to remain at whatever location won’t prevent Adam from traveling to her. And, as an aside, on-screen scenes between that real-life couple (Hartley and Stause) should prove delightful for delightful The Young and the Restless spoilers features when that happens.

Chloe’s return to town, at the exact time when a mystery woman met with Victor in prison, was too suspicious. Then, Victor basically acknowledged that his punishment plans had gone awry, but that all would soon be fixed.

Now, Bethany, someone Adam didn’t even know, is revealed as his framer? All points will collide when Victor, Junior is released from jail. And, then he’ll be motivated to hold everyone involved accountable.