The Young and the Restless Spoilers: Victor Turns Adam Into A Real Murderer – Prison Guard In Coma Dies? 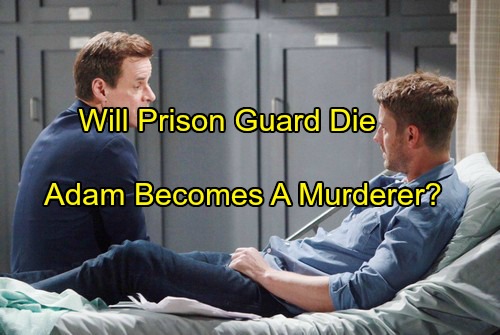 That’s true. But, what Genoa City’s leading manipulator doesn’t say is that he framed Adam as a form of payback and then wasn’t able to prevent Chloe (Elizabeth Hendrickson) from going rogue, thereby causing his son’s wrongful incarceration.

Y&R inept cops, Paul (Doug Davidson) and Dylan (Steve Burton), don’t know what her motive was, but a set of wigs, poison and the real pages of Sage’s (Kelly Sullivan) diary found in her motel room can’t be ignored. The Young and the Restless fans know that the combination of those discovered items tagged Bethany as Adam’s framer. However, connecting Bethany to Victor for that crime, even including his own admission of having supposedly hired her to distract Billy (Jason Thompson), isn’t yet possible.

Reacting defensively inside Newman Towers’ executive suite, as he often does, Victor first attempted to claim that Nick was questioning his motives for other reasons. But, The Moustache’s jab, that Nick wanted Adam out of the picture so he could take over the business, missed the mark. Victor’s hidden feelings were subsequently exposed on ‘The Young and the Restless’.

Upon further verbal pressure, Victor told Nick that he couldn’t have it both ways and asked if he saw his father as a savior, or a monster? Nick sat with a look of restrained disgust on his face, incredulous to the claim that his dad was an innocent party. As the first-born Newman son could see, Victor’s recent, four-month incarceration hadn’t changed his outlook on life.

Meanwhile, Adam has lost his mind at Walworth and pleads guilty to new assault charges for attacking a prison guard who has slipped into a coma. This prison guard who had the bad fortune to be mistaken by an insane Adam for his father may very well die, turning Adam into a true murderer for the first time. That’s part of the heavy price he’s paying as Victor Newman’s son.

Do you think Victor will pay for framing Adam the way he paid for the Marco debacle, with a relative slap on the wrist? Will the prison guard die from Adam’s assault, turning Victor’s latest victim, hid favorite son, into a murderer? Come back to CDL for all your The Young and the Restless spoilers, news and day-ahead recaps!

Check out this hilarious #yr11k blooper video! You can see what dorks we really are 😜