BY Heather Hughes on December 20, 2016 | Comments: one comment
Related : Soap Opera, Spoiler, Television, The Young and the Restless 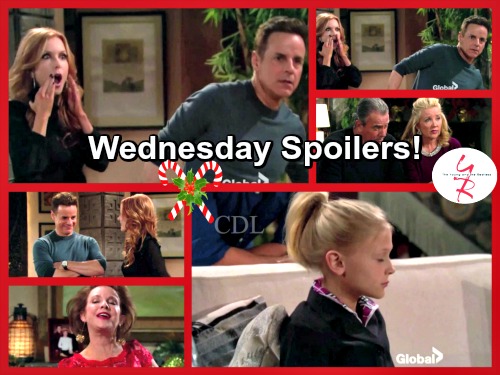 The Young and the Restless (Y&R) spoilers for Wednesday, December 21, tease that Lauren (Tracey E. Bregman) and Michael (Christian LeBlanc) will find a big surprise waiting for them. When they spot a huge Christmas present, they’ll decide to open it up. Gloria (Judith Chapman) will pop out of the box and shout, “Deck the halls, everybody!”

It looks like Gloria wanted to make a grand entrance. Her return will certainly catch her loved ones off guard. Michael and Kevin (Greg Rikaart) will be blown away by Gloria’s unexpected arrival. They’ll wonder what their mom is doing back in Genoa City.

Gloria will suggest that she simply wanted to see her boys and get caught up on everything happening in town. It’s been almost two years since Y&R viewers last saw her. Gloria will undoubtedly dish out some advice to her friends and family members. There’s a good chance Gloria will find herself involved in Fenmore’s drama, too.

Meanwhile, Sharon (Sharon Case) and Nick (Joshua Morrow) will tackle their own issues. They’ve been fighting nonstop and Faith (Alyvia Alyn Lind) just can’t take it anymore. She feels like she’s caught in her parents’ tug of war. Nick and Sharon will do whatever it takes to end this power struggle. It appears Victor (Eric Braeden) and Faith will help them out.

Wednesday’s preview video shows Victor saying, “Sweetheart, I told both your parents that you would like to make up your mind about where you want to stay.” Sharon and Nick will likely go along with that idea. Faith is getting older and she should be able to have more input on her living arrangements.

No matter what Faith decides, Dylan (Steve Burton) will promise to be there for his family. He’ll just want Sharon and Faith to feel loved. Of course, Dylan may run into some trouble soon. The Young and the Restless spoilers hint that some danger could be headed Dylan’s way.

As for Nick, he’ll make some tough realizations. He’ll have to accept that Sharon is always going to be in his life. If Nick can’t get past Sharon’s actions, he could end up pushing Faith away. It’s going to be a struggle, but Nick will probably do his best to forgive Sharon.

The Young and the Restless spoilers indicate that growth will likely be the theme for Sharon’s character over the next few months. She’ll find a new goal and someone special will help her achieve it down the road. We’ll give you updates as other news comes in. Stay tuned to Y&R and don’t forget to check CDL often for the latest Young and the Restless spoilers, updates and news. Come and join in the LIVE discussion on our Facebook Page!