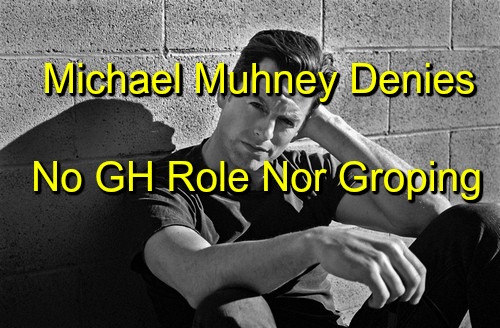 ‘The Young And The Restless’ spoilers tease that ‘Y&R’ alum Michael Muhney (former Adam Newman) has finally spoken out on the allegations that he sexually harassed Hunter King on the set of the CBS soap opera – and the actor insists that he did no such thing.

This explicit denial by the former was part of a 3 question Twitter chat offered by Michael during which he also said he would come back to Y&R as Adam Newman if Justin Hartley left for prime time – and MM made it clear that he wasn’t moving to a General Hospital role as he had never been asked.

Michael’s answer was clear when a Twitter follow asked if the rumors were true that he was in talk with General Hospital:

Too bad for all of us General Hospital fans! The chances of Muhney being rehired at Y&R are none as anyone who followed the ugly saga back in 2013 and 2014 can assure you.

Before Michael Muhney was killed off the CBS soap, rumors hit the internet in 2013 that there was some major drama backstage, and Hunter King (Summer Newman) had complained to TPTB that Michael Muhney was sexually harassing her and groped her.

After Michael Muhney’s exit from ‘The Young And The Restless,’ all hell broke loose on the internet. ‘Y&R’ fans were furious that the star had been let go – and accused Hunter King of making up the malicious allegations.

Jill Farren Phelps also took the brunt of the scandal, and ‘Y&R’ fans were outraged that she had fired the popular actor over the allegations that he harassed King with no proof at all.

After years of silence on the issue – Michael Muhney laughed off the rumors on Twitter this week. A curious fan tweeted Muhney and asked, “Did you really sexually harass Hunter King?” Michael replied, “ha! The big N-O. Absolutely not. Weird, tragic, internet rumor with no sources or quotes or real people involved.”

So there you have it ‘Y&R’ fans – according to Michael Muhney he is 100% innocent. If that is the case, then why was he fired from the CBS soap opera?

Do you think Hunter King made up the allegations – or was it all a rumor that spiraled out of control, and there were never any accusations to begin with? Would you like to see Michael Muhney offered a job on General Hospital? Let us know what you think in the comments below and don’t forget to check CDL for all of your ‘The Young And The Restless’ spoilers and news. 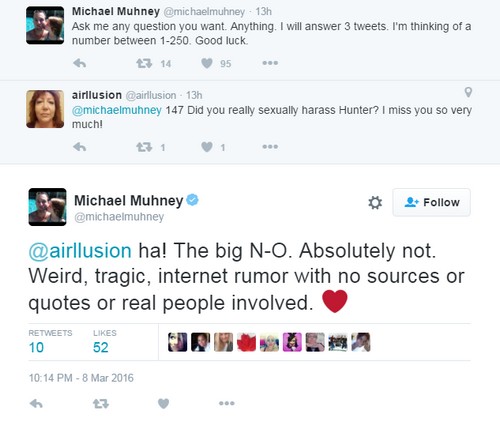