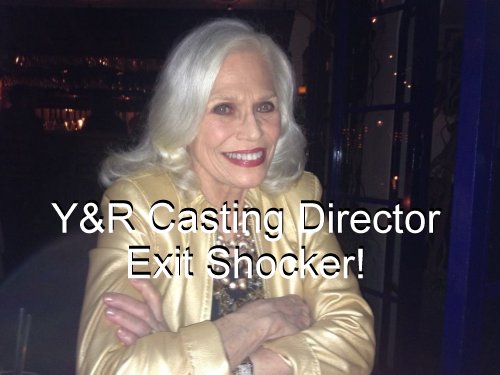 The Young and The Restless (Y&R) spoilers reveal that the shakeups aren’t done at the CBS soap. Judy Blye Wilson has left the show after a four-year run – and that follows the departure of Jill Farren Phelps as Executive Producer and her replacement with UK import Mal Young.

Judy Blye Wilson announced that she was leaving the show via a Facebook post on Friday evening, July 1. She wrote, “Today is officially my last day at The Young and The Restless. Yes – I made the decision weeks ago. After thirty years of casting daytime, I feel I need to pause.”

Wilson went on saying, “I am not retiring, just stopping to catch my breath. I have had many wonderful experiences and have made any lifelong friends along the way. I look forward to what the future brings. Love, Judy.”

She closed with a P.S. that read, “Thank you to all for the terrific going away party last night.” Judy Blye Wilson has worked in casting since 1968 when she landed her first gig at One Life to Live followed by Ryan’s Hope. 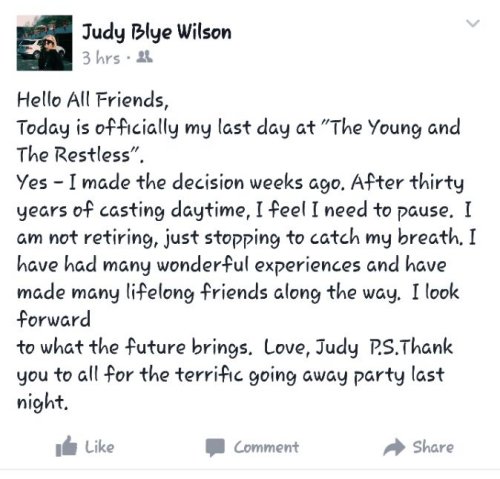 Wilson spent 16 years at All My Children from 1995 through 2011 when the soap ended then came to The Young and The Restless in 2012 where she has brought in some remarkable talent including Justin Hartley, Jason Thompson, Gina Tognoni and more.

Judy Blye Wilson has won three consecutive Daytime Emmy Awards for her work in casting on AMC plus six awards by the Casting Society of America for outstanding casting in daytime. Wilson was nominated for this year’s Emmy awards as well.

One of Wilson’s best-known casting arrangements was a young Sarah Michelle Gellar on All My Children. The casting announcement shocked many and has left many Y&R fans wondering if this is just the first of many more shakeups coming as Mal Young takes over the CBS soap.

Judy Blye Brown said her decision was made “weeks ago” and it was weeks ago that Mal Young tweeted “Day One” as he took over for Jill Farren Phelps at the CBS soap. Is this just the first of more Y&R staff overhauls as Mal Young makes a regime change? Or is the timing of this announcement just coincidental?

Share your comments below and check back with CDL often for all the latest The Young and The Restless spoilers and news.