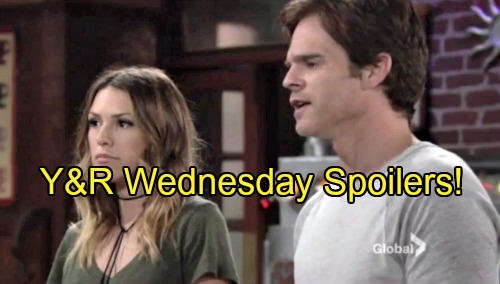 The Young and the Restless (Y&R) spoilers for Wednesday, August 31, tease that Neil (Kristoff St. John) will wonder what his loved ones are up to. Lily (Christel Khalil) has really been hounding Neil about his family problems. Neil ignored his estranged mother’s letters and still refuses to have anything to do with her.

Devon (Bryton James) and Cane (Daniel Goddard) agree with Lily. They feel like Neil needs to stop dwelling on the past. When Neil gets suspicious about where they just returned from, Cane will admit that they did what he should’ve done a long time ago. Lily will confirm that they went to see Neil’s mother.

Neil can’t control what his family does, but he’ll maintain that he has no intention of visiting his mom now or ever. Of course, Lily tends to be pretty persuasive. She’ll keep pestering Neil until he finally relents. Stick with The Young and the Restless see Neil confront his mother later this week.

In the meantime, Kevin (Greg Rikaart) will have a tense chat with Mariah (Camryn Grimes). He’ll pass along some updates on Adam (Justin Hartley) and insist that it’s best if he remains off the grid. Kevin will suggest that Chloe (Elizabeth Hendrickson) and Bella (Cali May Kinder) will be free to live their lives.

Mariah will ask if Kevin means they’re staying in Genoa City. It’s clear that Mariah doesn’t want Chloe around. She has strong feelings for Kevin and she wants to protect him from any potential pain. Nevertheless, Kevin will be firmly in Chloe’s corner. He’ll believe that Chloe and Bella have a chance at a fresh start in GC.

Speaking of fresh starts, Adam (Justin Hartley) will happily enjoy one with Chelsea (Melissa Claire Egan). They’ll delight in some cabin cuddling as they look forward to their future together. The Young and the Restless spoilers say Chelsea and Adam will run into trouble soon. They’d better savor this peace while it lasts.

Elsewhere, Sharon (Sharon Case) will offer Dylan (Steve Burton) a piece of advice. She’ll state that Nick (Joshua Morrow) was right. Dylan needs to let Adam and Chelsea go. Will “Dudley Do-Right” really be able to do that? It’s tough to say. Y&R fans will be anxious to see Dylan’s next move.

Dylan broke the rules when he was convinced that Victor (Eric Braeden) framed Adam. He got suspended over the continued investigation. There’s no reason why Dylan can’t break a few rules now. However, Dylan felt Adam was wrongfully imprisoned back then. He was determined to fix the situation.

This time Adam has actually committed a crime. Will that change Dylan’s view, even if Adam wasn’t in his right mind during the attack? Things are tricky, but Sharon may urge Dylan to think of Chelsea and Connor (Gunner and Ryder Gadbois).

Dylan doesn’t know what he’d do without Sharon and Sully, so he can surely understand how Adam is feeling at the moment. In the end, Dylan’s decision may not matter. The ball may be in Paul’s (Doug Davidson) court. Regardless, chaos is looming and Adam will be at the center of it all.

It looks like some exciting scenes are coming up. We’ll keep you posted as more news comes in. Stay tuned to Y&R and don’t forget to check CDL often for the latest Young and the Restless spoilers, updates and news.