The Young and the Restless Spoilers: Will Michael Muhney Replace Justin Hartley as Adam Newman? 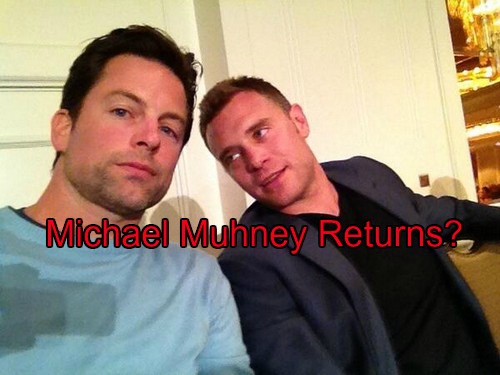 The Young and the Restless (Y&R) spoilers look at casting of three key Genoa City players and explore what the future may hold for each. The key roles of Phyllis, Adam, and Billy are held by Gina Tognoni, Justin Hartley and Jason Thompson on ‘The Young and the Restless’. Fans of this enduring soap opera rightfully hold certain feelings about actors who once embodied these characters. But, have the actors who filled these recast roles fulfilled expectations?

The original role of Phyllis Summers was a part-time gig when that character was introduced in 1994. But, Michelle Stafford’s performance proved to be so potent that ‘The Young and the Restless’ made her a full-time contract player. ‘Red’ quickly became iconic and Stafford’s glorious reign, with a brief respite, stretched to its voluntarily end in 2013. She’s since nicely transitioned to the role of Nina on ‘General Hospital’.

Tognoni arrived with solid soap credentials, having been a cast member on CBS’ beloved ‘Guiding Light’ (Dinah) and on ABC’s ‘One Life to Live’ (Kelly). Her version of Phyllis has been noticeably softer than Stafford’s in most scenes. That’s likely occurred through a combination of professional advisement and personal choice. Tognoni continues to create a different type of character than was seen in the past. Not nearly as frenetic, but surely engaging.

Justin Hartley’s ballyhooed hire followed Michael Muhney’s loud departure. Few fans would honestly degrade what Michale Muhney achieved as Adam. The man was consistently electric during his stay (2009-2014). Some would place him with the best daytime actors in recent memory.

Like Tognoni, Hartley brings a different energy to his role as a successor. Muhney’s snark was superb and appeared to often be ad-libbed, especially with Eric Braeden (Victor). Hartley’s Adam regularly gets under his dad’s and other people’s skin, but he’s played more of the poor soul angle since being reborn. Imposing the face-change storyline proved wise, as it allowed the revised Adam to introduce himself to the fictional people he knew in open disguise, while also allowing Hartley and the writers to wink at the audience simultaneously.

This Adam still matters, which shines equally on Hartley’s talent and Y&R’s choice to specifically hire him.

Of course The Young and the Restless spoilers fans know that Justin Hartley has stated clearly that he needs to take a break from Y&R for his show ‘This Is Us.’ When Hartley leaves the canvas, at least temporarily, and if fans can expect a recast Adam Newman or a return on the incumbent has yet to be announced. Naturally Michael Muhney would be the logical replacement and the overwhelming fan choice.

Perhaps Mal Young can exert some power and make a casting choice that is good for the show, especially since Hunter King is reportedly going to have a vastly reduced Y&R presence following her demotion to recurring status and pursuit of non-soap work. Now that Jill Farren Phelps has been fired from Y&R the possibility of a Muhney return might be improved.

Jason Thompson debuted in January on ‘The Young and the Restless’ after a long run (2005 to early January 2016) as Patrick Drake on ‘General Hospital’. Billy Miller clearly holds the title as the best adult Billy Abbott. He, like Stafford, also shifted to GH (Jason) after leaving ‘The Young and the Restless’ courtesy of poor treatment at the hands of Jill Farren Phelps.

The latest Billy has been written back to his rogue roots. Thompson will turn 40 on November 15, 2016. His brooding Billy defines the boyish-man type who simply can’t turn the corner. Seasoned fans should continue to give this solid actor time. Early efforts demonstrate that he has the chops to win the audience over as his character finds new ways to lose even though life’s deck has been stacked in his favor.

Fans of ‘The Young and the Restless’ rightfully express their opinions on a regular basis. So, have the actors who currently play Phyllis, Adam, and Billy lived up to expectations? Please let us know in the comments below and answer our poll question. CDL is a leading source for everything linked to ‘The Young and the Restless’ so come back to enjoy to all your Y&R spoilers, news and updates!