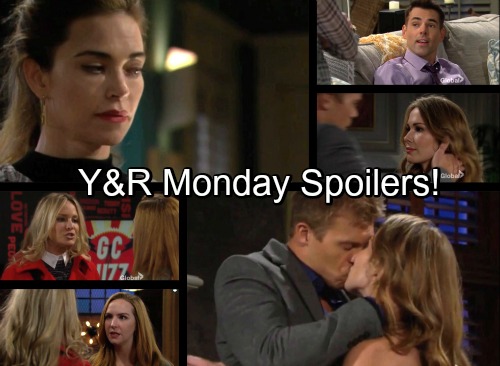 The Young and the Restless (Y&R) spoilers for Monday, November 14, tease that Sharon’s (Sharon Case) decision will spark outrage from Mariah (Camryn Grimes). It seems Sharon is choosing to respond to Patty’s (Stacy Haiduk) accusations and Hilary’s (Mishael Morgan) comments. Mariah will find out that Sharon wants to go live on GC Buzz.

Naturally, Mariah will insist that this is a huge mistake. She’ll try to reason with Sharon, but her efforts will fail. Sharon will maintain that she has to do this. She’ll feel like she needs to step up and set the record straight. Sharon will hope to tell her version of events and put an end to the media circus.

Mariah will still think this is a horrible idea. She knows how nasty Hilary can be. It’s all about the ratings. Hilary could easily make things even worse for Sharon. Y&R spoilers hint that this interview could get tricky. Can Sharon keep her cool and put a new spin on the chaos? Stay tuned to see what’s in store.

Other Young and the Restless spoilers say Billy (Jason Thompson) will urge Victoria (Amelia Heinle) to cut Travis (Michael Roark) some slack. Billy realizes that Travis is struggling to cope with Victor’s (Eric Braeden) overbearing nature. He’ll suggest that he was in Travis’ shoes once and he understands what he’s going through. 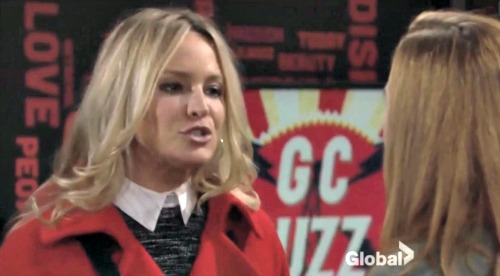 Victoria will point out that she’s over Travis’ drama, but Billy will think she’s being a little hard on him. He’ll encourage Victoria to give the guy a break. Travis is just frustrated by the complications of being in Victoria’s life. There are certainly a lot of them.

Travis hates living under Victor’s thumb. Jealousy is clearly an obstacle as well. Travis can’t handle the fact that Billy and Victoria are so chummy. Unfortunately, that could be a deal-breaker. Victoria has no plans to push Billy out of the picture.

Of course, Travis might blow everything anyway. He’ll share some steamy moments with Michelle (Kelly Frye) in Monday’s episode. The Young and the Restless preview video shows Travis pulling Michelle close for a kiss. Michelle will happily indulge at first, but concerns could come later.

Since Travis is drunk, Michelle may wonder if this is really what he wants. She might assume that the alcohol is making Travis’ decisions right now. That’s partially true, but this was bound to happen eventually. With or without booze, Travis has unresolved feelings for his ex.

This hot encounter might make Travis get why Victoria is still drawn to Billy. Sometimes it’s not easy to walk away. However, we’ll definitely see some problems once this passionate session wraps up. There are already trust issues between Travis and Victoria. He kept secrets about Michelle before and he could do it again.

On the other hand, maybe Travis learned his lesson. He might come clean about what he’s done. Regardless, Victoria may not be willing to forgive and forget. It sounds like heartache is looming. We’ll give you updates as more news comes in. Stick with Y&R and don’t forget to check CDL often for the latest Young and the Restless spoilers, updates and news.