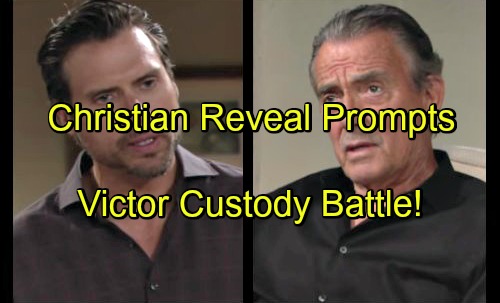 Recent The Young and The Restless (Y&R) spoilers hint that the Sully secret is about to come out (at last) but Victor Newman (Eric Braeden) will stun the family with the shocking revelation of the paternity secret when he launches a custody battle for his grandson Christian.

Sharon Newman (Sharon Case) will crumble under the continued harassment from crazy Patty Williams (Stacey Haiduk) and Sharon, Patty or perhaps even Mariah Copeland (Camryn Grimes) will blab the secret to put an end to the torment over the baby lie.

The fallout will be enormous and after the dust clears, Nick Newman (Joshua Morrow) will be thrilled to discover that the child he thinks is his son is alive. But his joy may be short-lived because Victor is grieving the loss of his own son Adam Newman (Justin Hartley) and may act out wildly.

Victor is devastated by the loss of Adam and given that he knows that Christian is Adam’s son, not Nick’s, Victor might see gaining custody of Christian as the best way to honor his son and regain some aspect of the beloved child he lost – even if it means crushing Nick to do so.

Victor and Chelsea Newman (Melissa Egan) both know the truth of the matter and that Adam was Christian’s biological father. But with Adam dead, Chelsea would likely not reveal the stunning truth to Nick because there’s no need to do so and the truth would hurt him needlessly.

But Victor has a different vision when it comes to what’s right. Victor could rationalize that Nick should NOT raise Adam’s child. Victor strongly believes that Christian should be raised to know that his father was Adam Newman and taking custody of the baby would ensure that future.

Victor blames himself for Adam’s death since he would never have been in that predicament had Victor not brought Chloe Mitchell (Elizabeth Hendrickson) back to town and set Adam up to be jailed and then on the run – all of which led to Adam’s explosive dead (at least for now).

Victor could easily talk himself into believing that he’s doing right by Adam by taking Christian to raise to honor his namesake son that was lost. In fact, Victor might see taking Christian as his duty to Adam and an opportunity to have another chance with a mini-Adam.

The rest of the Newmans will be stunned if Victor goes this route, but since both of Christian’s biological parents are dead, Victor might stand a good chance of gaining custody of the child given his money and power. Plus, Nikki Newman (Melody Scott) could be talked into supporting him.

If The Young and The Restless spoilers play out as hinted, Nick will get back his son Christian only to have his dad Victor snatch the child away after revealing the gut-wrenching truth that Christian never was his and the last vestige he had of Sage Newman (Kelly Sullivan) is lost.

What do you think Y&R fans? How long will Victor hold out after the “Sully is Christian” reveal before he spills the long-hidden paternity truth and makes a move to take his grandson to raise for himself? Share your comments below on this coming story twist.