BY Heather Hughes on August 29, 2016 | Comments: one comment
Related : Soap Opera, Spoiler, Television, The Young and the Restless 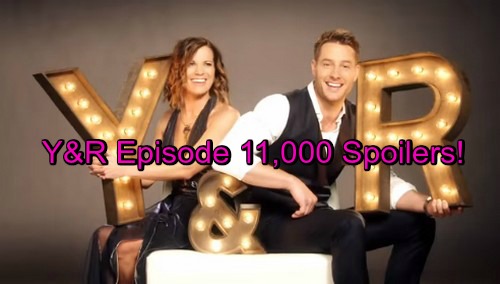 The Young and the Restless (Y&R) spoilers for the week of August 29 – September 2 tease that we’ll see some shocking encounters and jaw-dropping twists. The CBS soap intends on packing in plenty of excitement. Y&R fans are looking forward to the stunning moments that await.

It’s all building up to the show’s 11,000th episode on September 1, but the effects of this epic day will linger for months! Of course, you shouldn’t skip the rest of this week either. It’s all going to be good stuff. The latest Young and the Restless promo offers some hints about what’s to come.

Neil’s (Kristoff St. John) family recently learned that he’s been keeping a big secret. His mother abandoned him years ago, but she’s reached out many times through letters. Neil ignored his mom’s attempts to get in touch, but Lily (Christel Khalil) will push him to see her again. She’ll suggest that Neil has been nursing this wound since he was a kid.

Star Trek alum Nichelle Nichols will portray Neil’s mom in two episodes. Her name is Lucinda and she has a lot she wants to say to Neil. Unfortunately, Neil has a lot to say as well and most of it isn’t pleasant.

The Young and the Restless preview video shows Neil walking into what appears to be Lucinda’s nursing home room. Neil will demand some answers about why Lucinda walked away from him. Stick with Y&R for updates on this tense confrontation.

Meanwhile, Adam (Justin Hartley) will be thrilled to have Chelsea (Melissa Claire Egan) and Connor (Gunner and Ryder Gadbois) at the cabin. They’ll make plans to move to another location soon, but they’ll just try to enjoy their reunion for now. Alas, Chelsea and Adam shouldn’t get used to this bliss.

Dylan (Steve Burton) will be in hot pursuit before long. The Young and the Restless spoilers say Dylan will find the secret passageway that Chelsea used to avoid detection. Once Dylan tracks Adam and Chelsea down, some arrests may be made.

Y&R viewers can expect things to get awfully tricky. The promo shows Paul (Doug Davidson) and Dylan running on a foggy street. It’s much different than the wooded setting Chelsea and Adam were in before. Maybe Adam will try to make a break for it once he’s taken into custody. He may give the cops the slip in the city.

Dylan and Paul seem to be sprinting after a getaway car. However, another shot shows Chelsea and Nick (Joshua Morrow) standing there in shock. Chelsea will look concerned about Adam’s fate. Perhaps Adam will go on the run and send for his family later. It’s even possible that Adam’s death could be faked.

We know that Victor’s (Eric Braeden) world will be turned upside down the day after most of this occurs. It takes a quite a bit of drama to shake Victor. An arrest or the news of Adam’s “demise” might do the trick.

Chelsea may or may not be in the loop on Adam’s next plan. Regardless, this is a week you won’t want to miss. Stay tuned and don’t forget to check CDL often for the latest Young and the Restless spoilers, updates and news.