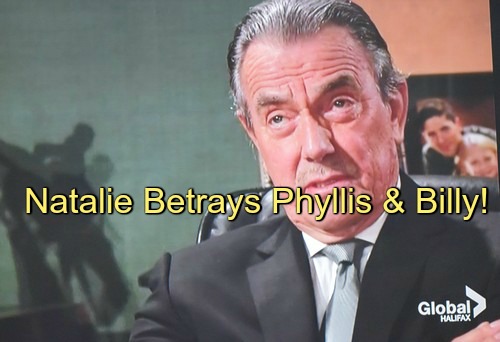 “The Young and the Restless” (Y&R) spoilers reveal that Phyllis (Gina Tognoni) and Billy’s (Jason Thompson) plan is about to hit a huge snag. The whole thing hinges on someone they can’t trust. Natalie (Mara McCaffray) has always been an iffy character. Unfortunately, it looks like Natalie will be responsible when Phyllis and Billy’s plot falls apart.

Y&R spoilers indicate that Victor (Eric Braeden) will decide enough is enough. He’ll demand that Natalie produce the product she promised. Now that Luca (Miles Gaston Villanueva) and Summer (Hunter King) suspect Natalie is a con, Victor will make sure she knows what’s at stake. Basically, Victor will insist that Natalie needs to do what she’s told – or else.

Natalie will start to worry about what’s in store if she doesn’t comply. As a result, Natalie will hand over the real deal instead of a phony like Phyllis ordered. Once Natalie gives the program to Victor, she’ll have to deliver the bad news to Phyllis and Billy. They’ll probably be furious when they get updates on Natalie’s betrayal. They were really counting on Natalie to come through for them. 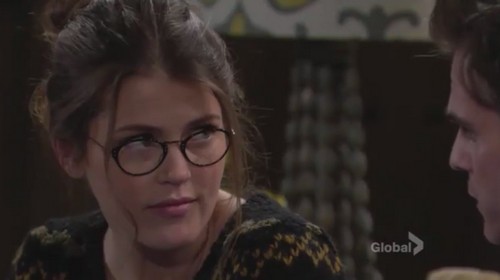 Nevertheless, there could be a glimmer of hope. Phyllis will have no intention of giving up on her plans for revenge. Billy wouldn’t mind a slice of vengeance pie either. He might as well stay the course and help Phyllis get the retribution she craves. However, it’s going to be tough to gain the upper hand without their ace in the hole. It seems they’ll just have to find a new one.

“The Young and the Restless” spoilers say Phyllis and Billy will determine that Adam (Justin Hartley) could be their last chance to save the scheme. They’ll realize Adam could be the key to securing power and getting the project back. All they have to do is dig up some dirt to use against Adam.

Victor is already holding a secret over Adam’s head. Since he’s actually Christian’s father, Adam has been doing everything he can to keep it under wraps. Will Phyllis and Billy end up putting even more pressure on Adam? Stick with “The Young and the Restless” to watch them make their next move.

So Y&R fans, what do you think about Natalie stabbing Phyllis and Billy in the back? Will they be able to regroup and blackmail Adam into helping them? Voice your opinion in the comments below and don’t forget to check CDL often for the latest “Young and the Restless” spoilers, updates and news.