The Young and the Restless (Y&R) Spoilers: A New Summer Newman in GC – Three Hot Actresses Who Might Replace Hunter King? 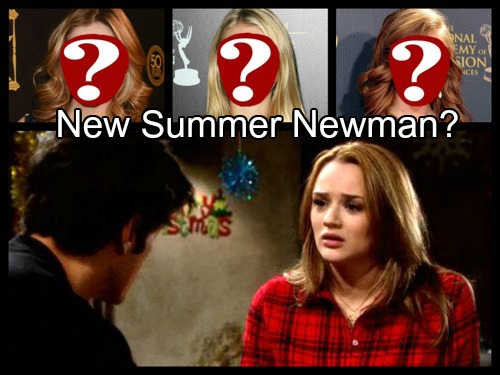 “The Young and the Restless” (Y&R) spoilers tease that changes are happening for Summer (Hunter King) on the CBS soap. Hunter King has been bumped up to a series regular on her primetime series, “Life in Pieces,” which means she’s dropped down to recurring on Y&R.

Without a contract, there’s no guarantee that Hunter King will stick around for very long.

If King keeps finding success outside of soaps, she may choose to leave Genoa City behind completely. There’s even a chance that “The Young and the Restless” could decide they need someone who’s more available. In other words, the search for a new Summer could be underway soon.

There are certainly some good options floating around. Three recast ideas immediately come to mind. First, we have Lindsay Bushman. She scored the role of Summer in 2012, but she only lasted a few months. It seems Jill Farren Phelps, Y&R’s executive producer, wanted to go in another direction.

In interview with About.com, King hinted that Phelps hired her without an audition. She was apparently familiar with King’s previous work and liked her enough to yank the part away from Bushman. That fact might leave Bushman feeling a little bitter, but anyone can be persuaded for a price.

Besides, there’s been some buzz about Phelps potentially being forced out of her position. Could Bushman be convinced to come back without Phelps at the helm? It’s a possibility to consider. Jen Lilley also just confirmed her departure as Theresa on “Days of Our Lives.” Word has it that Lilley wants a break from soaps, but we repeat that anyone can be persuaded for a price.

It’s worth noting that there are some similarities between Summer and Theresa. Both characters are stubborn and highly polarizing, so Lilley could fit right in at “Young and the Restless.” Next, we have Ashlyn Pearce. She was fired from her role as Aly on “The Bold and the Beautiful.”

Many fans were outraged by Aly’s death and would love to see Pearce pop up on another soap. Pearce might bring a new side to Summer. It could be a refreshing change of pace. As a bonus, Pearce’s reddish locks would be a nice touch.

It’d be fun to have Summer favor her red-headed mom, Phyllis (Gina Tognoni).

Of course, we shouldn’t read too much into whether a character appears or acts like the traditional Summer. Look at what happened with Y&R’s latest Billy recast. Jason Thompson doesn’t resemble or have an acting style that lines up with any previous Billy. He’s doing his own thing and it’s working out just fine.

As long as they get a solid actress, viewers could easily accept a new Summer. Will we see someone replace King down the road? Stick with “The Young and the Restless” for updates on Summer’s future.

So Y&R fans, what do you think about the news that Hunter King was dropped to recurring due to her primetime role? Do you believe a Summer recast will happen soon? Would you be on board with Linsey Bushman, Jen Lilley or Ashlyn Pearce?