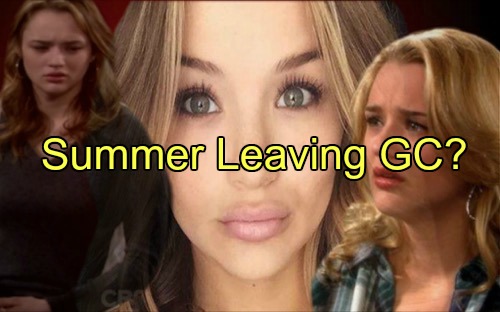 ‘The Young and the Restless’ (Y&R) spoilers tease that Hunter King has been demoted to recurring status, and ‘Y&R’ fans will be seeing a lot less of Summer Newman in the future. Summer Newman has been a central character on the CBS soap opera for years, but King’s recent primetime ventures will be taking up the majority of her time now.

Hunter King starred in Season 1 of the new CBS sitcom ‘Life In Pieces’ as Clementine. The new comedy received rave reviews and will be returning in the Fall for Season 2. According to a report from Deadline, Hunter King has been promoted to series regular on ‘Life In Pieces.’ In of her new promotion, Hunter has stepped down to just a recurring role on ‘The Young And The Restless.’

‘The Young And The Restless’ spoilers recently revealed that Summer Newman and Luca’s relationship is growing serious very quickly, however her father Nick Newman (Joshua Morrow) is not happy about them moving in together. Now that Hunter King is bumped to recurring status – it looks like it could have a major impact in Summer and Luca’s relationship.

One of two things could happen on ‘Y&R.’ Nick Newman could get his way and his daughter and Luca’s relationship will be dissolved, meaning less reason for Summer to be on the canvas. Or Nick’s plan could backfire, and Summer and Luca could run off together, also resulting in less screen time for Summer.

So ‘Y&R’ fans, what do you think of these new spoilers? Are you excited to be seeing less of Hunter King in Genoa City? How do you think her recurring status will affect Luca and Summer’s relationship moving forward? Will the writers break them up, could Summer be leaving town to explain her absence?

Share your thoughts in the comments below and don’t forget to check CDL for all of your ‘The Young And The Restless’ spoilers and news.