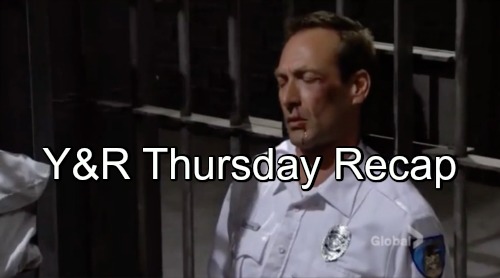 The Young and the Restless (Y&R) spoilers for Thursday, August 18, tease that Dylan (Steve Burton) will finally find the evidence he’s been looking for. In Bethany’s (Chrishell Stause) hotel room, Dylan will locate the missing diary pages. They’ll be tucked behind a light switch place. Dylan will show them to Paul (Doug Davidson) and point out that the real entries don’t implicate Adam (Justin Hartley).

Dylan will call for Adam’s release and Victor’s (Eric Braeden) arrest. Paul will remind Dylan that they don’t have anything that ties Victor to Bethany. It’ll be tough to prove Victor was involved in the setup. Dylan will at least think it’s time to get Adam back home where he belongs.

At the penthouse, Chelsea (Melissa Claire Egan) will tell Chloe (Elizabeth Hendrickson) about Adam’s letter to Connor (Gunner and Ryder Gadbois). It was the perfect birthday gift. Chloe will suspect that an even better present is on the way. After Dylan stops by to provide updates on the diary pages, Chelsea will wonder how Chloe knew things were about to change.

Chloe will suggest that it was time for Chelsea to get some good karma. Unfortunately, Adam will continue to lose hope in prison. He’ll throw his food tray and hallucinate that the guard is Victor. Adam will imagine Victor gloating about Chelsea moving to Paris and meeting a new man.

Chelsea will arrive to give Adam great news about his case. Adam will turn down the visit, but the guard will insist that Chelsea needs to see him. Adam will visualize Victor in front of him and he’ll start punching the guard. An alarm will go off as Chelsea screams in the visiting room.

Adam was about to get off the hook for one crime, but now he’s committing another. Assaulting a prison guard definitely isn’t going to help Adam’s situation. Chelsea will fear that Adam could face severe consequences.

Other Young and the Restless spoilers say Ashley (Eileen Davidson) will warn Phyllis (Gina Tognoni) that she’s flirting with danger. She’ll think Phyllis should worry about her own marriage instead of Summer’s (Hunter King) impending nuptials. Phyllis will stand by her decision to get Luca (Miles Gaston Villanueva) out of Summer’s life.

Meanwhile, Jack (Peter Bergman) will urge Victor to stay away from Phyllis. Vic will point out that they teamed up for a good cause. They both want rid of Luca. Victor will add that he isn’t surprised Phyllis wanted to work with him. He’ll imply that Phyllis isn’t getting any support from Jack.

After Jack exits, Paul will show up to grill Victor about Bethany. Victor will claim he only hired Bethany to seduce Billy. He’ll deny any involvement in Adam’s setup. Paul won’t buy Victor’s story. He’ll assure Victor that he’s going to get to the bottom of this.

When Billy hears about Bethany’s connection to Victor, he’ll grow concerned. He’ll tell Phyllis that they might be in trouble. If Victor knows about their affair, he could have evil plans. Phyllis will think Victor would’ve exposed it now. Billy will hint that Victor might be saving it for a rainy day.

Y&R spoilers reveal that Ashley will comfort Jack during a chat about his marriage. She’ll believe Phyllis is lucky to have Jack as her husband. Ashley won’t think Jack should blame himself for Phyllis’ issues. The Young and the Restless viewers will be anxious to see what the future holds for Phyllis and Jack.

Elsewhere, Cane (Daniel Goddard) will gripe at Jill (Jess Walton) for meddling in Billy’s love life. Jill will mention how content Cane is now that he’s back with Lily (Christel Khalil). She’ll suggest that she wants happiness for Billy and Victoria (Amelia Heinle), too. Cane will mull it over and determine that Jill could use his help.

It sounds like some sneaky drama is coming up. Jill is certainly a woman on a mission. Will she succeed in bringing Victoria and Billy together? Stay tuned to Y&R and don’t forget to check CDL often for the latest Young and the Restless spoilers, updates and news.