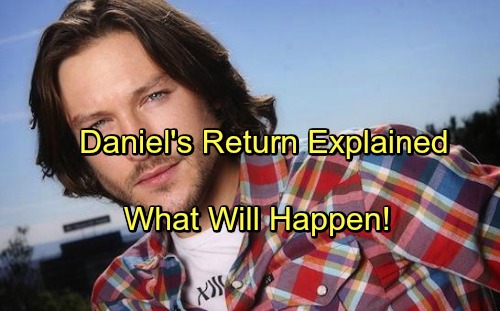 The Young and the Restless (Y&R) Spoilers fans are familiar with Michael Graziadei (Daniel Romalotti). This well-liked character’s limited return to Genoa City on August 25, as originally reported by CDL, arrives just prior to the show’s historic 11,000th episode, which is set for September 1. Phyllis (now played by Gina Tognoni) and Summer (Hunter King), will surely benefit from Daniel’s presence, as both ladies are dealing with intense personal issues.

All drama can’t be instantly resolved on soap operas, even Y&R, or in real life. So, Daniel’s brief trip home won’t help to secure Phyllis’ marriage with Jack (Peter Bergman), or allow Summer to deal with the coming emotional fallout involving Victor’s (Eric Braeden) plans to take down Luca (Miles Gaston Villanueva) and hopefully, in The Moustache’s opinion, stop her marriage to him. But, as many viewers know, simply having a loved one around during times of strife is often deeply beneficial.

Tognoni was born in 1973 and Graziadei in 1979. While Phyllis gave birth to Daniel at a young age, The Young and the Restless spoilers fans know that they will have to look past the obvious, on-screen age mismatch where these two actors are concerned. Include Y&R’s always terrific makeup team and this issue will likely be negligible.

The Phyllis character, as originated by Michelle Stafford, was a rock star groupie. She was obsessed with Danny Romalotti (Michael Damian), began stalking him and later gave birth to a baby (Daniel) that she claimed was his biological child. Claimed is the key word in the last sentence, as Daniel was actually Brian Hamilton’s (played by William Wallace and also Steven Culp) son. No mention was ever made as to whether Brian and Devon Hamilton (Bryton James) were genetically connected.

Danny eventually learned that Daniel wasn’t his flesh and blood, but sued for custody and won. Christine (Lauralee Bell), aka ‘Cricket’, who was Danny’s true love, help to defeat Phyllis in court, which played heavily into their enduring rivalry. Whenever The Young and the Restless spoilers fans heard Phyllis use ‘The Bug’ nickname they knew exactly who was being referenced.

This summer Daniel’s name was referenced, along with his artistic career, which savvy soap fans suspected telegraphed this character’s potential (now realized) return. Devotees will be interested to see if Daniel brings Lucy with him as well. She’s the daughter of Daisy (Yvonne Zima), who’s mother was Sheila Carter (Kimberlin Brown). Of course, Sheila, who’s believed to be deceased, is the most iconic villain in Y&R’s history.

At the seeming end of that character’s run, Sheila had reconstructive surgery and became Phyllis’ doppelganger. Ah, what a small Y&R world it is and shall always be.