‘The Young and the Restless’ Spoilers: Week of August 8-12 – Shocking Proof, Treacherous Schemes and an Unexpected Alliance 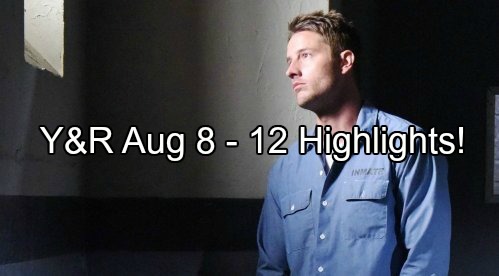 The Young and the Restless (Y&R) spoilers for the week of August 8-12 tease that we’ll see some bombs dropping in Genoa City. Several unexpected revelations are on the way. For starters, an unlikely alliance could form. Victor (Eric Braeden) and Phyllis (Gina Tognoni) will find themselves on the same team.

Summer (Hunter King) will decide to get married ASAP, which means Phyllis and Victor will need to kick their plans in gear. Both of them would do anything to stop this union from happening. They believe Luca (Miles Gaston Villanueva) is pretty much the worst possible choice that Summer could make.

Regardless of what Luca’s motives are now, it doesn’t change the fact that he used Summer. Once a user, always a user – at least that’s how Phyllis will feel about it. The Young and the Restless spoilers indicate that Luca could be caught off guard by a sneak attack.

While Victor deals with that crisis, another one will remain in the back of his mind. Y&R viewers know that Victor has been threatening Chloe (Elizabeth Hendrickson) over the journal pages. Victor wants them back and he wants them back now!

Unfortunately, Chloe just isn’t getting the message. The Young and the Restless spoilers suggest that Victor will hope he can get through to Chloe. She may regret dragging her feet. Of course, none of that will even matter if Dylan (Steve Burton) can crack the case. He’ll soon figure out a way to prove that Chloe and Victor are in cahoots.

Sharon (Sharon Case) will be stunned by the news that Chloe has been working with Victor. Dylan will claim he can get the evidence, but he may have run into some trouble. Paul (Doug Davidson) has been clear about the case being closed.

Dylan will take his plot one step too far and it could land him in hot water. Meanwhile, Billy (Jason Thompson) and Victoria (Amelia Heinle) will also face drama with Cane (Daniel Goddard). They intend on running Brash and Sassy without Cane’s input, but that decision isn’t going to go over well.

Cane will realize that he’s being edged out and he won’t like it one bit. He’ll probably go whine to Jill (Jess Walton) about it, but she’ll have bigger issues to deal with. The Young and the Restless spoilers say Jack (Peter Bergman) will open up to Jill about his personal problems.

Jill will have to offer Jack advice without tipping him off to what she knows. After Jill saw Billy in bed with Phyllis, she became determined to fix this mess. Jill wants Billy to reunite with Victoria and she believes Phyllis belongs with Jack. Will all of Jill’s wishes come true? Maybe, but only briefly.

Y&R spoilers hint that Phyllis and Billy’s fling will eventually be exposed. When that epic moment finally arrives, it could ruin everything Jill has worked for. It’s anybody’s guess how long it will take to rebuild these pairings. We’ll give you updates as more details emerge. Stay tuned and don’t forget to check CDL often for the latest Young and the Restless spoilers, updates and news.