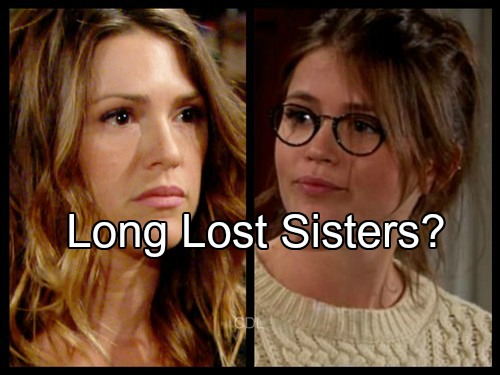 The Young and the Restless (Y&R) spoilers tease that we may learn more about Natalie (Mara McCaffray). Could she have a connection to Genoa City that we don’t know about? Soaps love to throw in twists at any given moment. It’s possible that Natalie is related to another character on canvas.

The idea that Natalie could be Chloe’s (Elizabeth Hendrickson) sister is gaining some traction online. It would be an interesting route to take. After all, Kevin (Greg Rikaart) has commented on the fact that they look alike. Natalie was even mistaken for Chloe in the security camera footage.

Of course, Y&R might just be playing up the similarities to show that Kevin hasn’t truly let go of Chloe yet. Still, they’ve left a door open for a sister situation. It wouldn’t be too difficult to explain what went down.

Related: Who is Natalie Really – What is Her Mysterious Past?

Esther (Kate Linder) had a one-night stand with a plumber named Tiny. It resulted in Chloe’s conception, but Tiny took off. Since he simply disappeared, Tiny obviously doesn’t have a great track record of caring for his kids. Maybe Tiny knocked up someone else and Natalie was left behind, too.

The Young and the Restless gave Natalie a muddled backstory. First, Natalie said she was an orphan. Then, she said her wealthy parents sent her to boarding school. It’s possible that Natalie was lying about some or all of that. She was and continues to be a little untrustworthy. 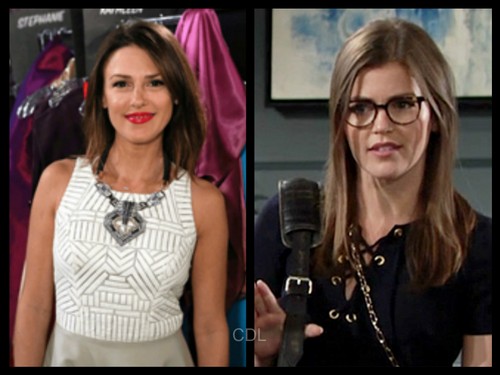 However, it’s also possible that there’s some truth to each of those statements. Let’s say Tiny left Natalie’s mom and she decided to give her daughter up for adoption. Natalie could’ve been taken in by a rich couple. That could be where the boarding school element comes in.

Regardless of the details, there’s enough to create a solid story here. Kevin appears to have some lingering feelings for Chloe. If Chloe eventually reciprocates those feelings, we could have a love triangle featuring Kevin and two half-sisters. It would be the ultimate family feud. Mariah could just be the fourth wheel that possibly wins out in the end.

Based on Natalie’s reaction to Chloe, it seems she would be in the dark about her sis. It could be fun to have both of them get the stunning news. On the other hand, Natalie has always been pretty slick. She may have known about her potential half-sister all along. That might even be why Natalie tried to grow closer to Kevin.

Natalie is a hacker, which means she would’ve had no problem tracking Chloe down. She could’ve had access to Chloe’s records. Nevertheless, this feels like a revelation that would be best left as a surprise for both parties. You know the drill with long-lost relatives on shows like The Young and the Restless. They typically grow to despise each other before they find out they’re family members.

Would you like to see a storyline like this play out? Could you buy Natalie as Chloe’s sister? We’ll give you updates if any other spoilers support this idea. Stay tuned to Y&R and don’t forget to check CDL often for the latest Young and the Restless spoilers, updates and news.