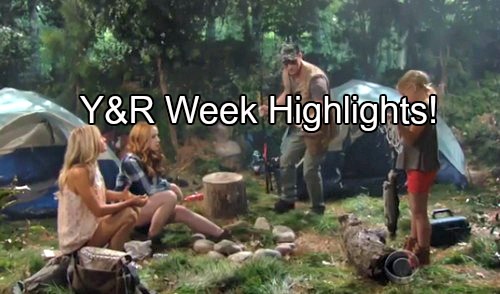 The Young and the Restless (Y&R) spoilers for the week of August 1-5 and the latest Y&R promo video tease that Phyllis (Gina Tognoni) will try to stop Billy’s advances. She’ll push Billy (Jason Thompson) away after his elevator kiss. Phyllis will also give Billy a major slap. She’ll make it crystal clear that it’s over between them.

Jill (Jess Walton) will realize that Billy and Phyllis still haven’t been avoiding each other. She’ll pay Phyllis a visit and insist that she needs to get with the program. Jill is convinced that Billy and Victoria (Amelia Heinle) are meant to be together. They won’t have a shot if Billy believes he still has a chance with Phyllis.

The Young and the Restless spoilers say Phyllis will assure Jill that she shut Billy down. She’ll state that she loves Jack (Peter Bergman) and wants to focus on her marriage. Of course, loving someone and actually being in love are two very different things. There’s definitely going to be more temptation for our star-crossed lovers.

Elsewhere, Kevin (Greg Rikaart) will talk to Mariah (Camryn Grimes) about Bella (Cali May Kinder). He’ll be nervous and maybe even a tad excited about the idea that he could have a daughter. The news would really shake up Kevin’s world.

Y&R spoilers indicate that Stitch (Sean Carrigan) will deliver the DNA results. Kevin will find out if his life is going to change forever. However, the fact that Chloe agreed to a paternity test seems telling. If Kevin is the father, why would Chloe go along with the test? Her lies would be exposed.

Perhaps that means Bella doesn’t belong to Kevin or Chloe intends on changing the results. On the other hand, we’ve learned to expect the unexpected on the CBS soap. Kevin might be listed as the father after all. You just never know in Genoa City.

Whatever the case, don’t count on discovering Bella’s TRUE paternity anytime soon. That reveal is still months away. Meanwhile, Summer (Hunter King) will have a revelation of her own. Y&R’s weekly promo shows Summer admitting that she’s late. A stunned Luca (Miles Gaston Villanueva) will ask if Summer is pregnant.

This is certainly a twist Summer wasn’t prepared for. That’ll teach ‘em to have sex like rabbits in the most fertile city on the planet. They were bound to have a pregnancy scare at some point. It looks like Nick (Joshua Morrow) and Phyllis may get updates on this potential baby. They’ll determine that they need a plan or Luca could sink his claws even deeper into Summer.

Finally, The Young and the Restless will take a trip to the great outdoors. Dylan (Steve Burton) will load up the fam and take them camping. Sharon (Sharon Case) and Mariah will look less than thrilled, particularly when Dylan asks who’s ready to gut and clean the fish.

As for Faith (Alyvia Alyn Lind), she’ll probably be her usual chipper self. All in all, the gang should enjoy the experience. It may not be Sharon’s ideal choice for a summer getaway, but she’ll want to make her husband happy.

Let’s hope Sharon gets a break from her stress over the Sully secret. Goodness knows she needs a breather! Stay tuned and don’t forget to check CDL often for the latest Young and the Restless spoilers, updates and news.