The Young and the Restless Spoilers: Kevin Gets Paternity Test Results for Bella From Stitch – Shocking Outcome Floors GC 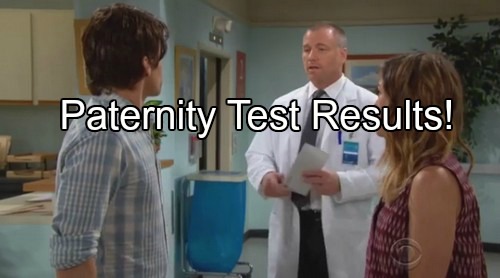 The Young and the Restless (Y&R) spoilers show that Chloe’s (Elizabeth Hendrickson) personal history is very messy. Of course, that’s true for everyone who lives in a soap opera world. As of now, Chloe’s returned to Genoa City with Bella (Cali May Kinder) by her side and a looming paternity test seems likely to produce one of four possible outcomes on next week’s episodes.

The person who seems most likely to be Bella’s father is Billy (Jason Thompson). Chloe literally stole his genetic material from a medical lab prior to leaving town in 2014. Hendrickson left Y&R on her own accord two years ago, wanting to take a break from a 10-year run in daytime. As for Chloe, she was overwhelmed by grief back then and intended to literally replace Delia (Sophie Pollono) with a new little girl. Her plan worked, but no evidence has been offered yet that confirms Bella is Billy’s biological child.

Kevin (Greg Rikaart) and Chloe had one final romantic connection just before she left Wisconsin two years ago. That established a timeline that would match Bella’s subsequent birth date. Kevin easily recognized that Chloe’s newest daughter could be his child, which is why his ex-wife quickly told him that she wasn’t his daughter. Whether that statement is definitive remains to be seen on The Young and the Restless as Kevin gets the paternity results from Stitch during the week of August 1 – see the Y&R video below!

There’s always the possibility that Chloe was involved with another man before she was written out of The Young and the Restless a few years ago. She also could have connected with a man shortly thereafter, or while at the mental health facility. If either situation happened then the chances that Billy, or Kevin, is Bella’s father are less than 50 percent.

However, there’s also another option, deception. Paternity test results are often tampered with, or produce misleading results, on Y&R. So, whatever man’s name is revealed as the father on this week’s episodes might only be the first step in a multi-staged reveal that later switches to another person as Bella’s real dad. The Young and the Restless fans ans all characters connected to Chloe in Genoa City know that nothing is ever simple in her life. So, this unresolved paternity issue is certain to remain compelling.