‘The Young and the Restless’ Spoilers: Who’s the Real Natalie – Vote on Her Mysterious Past 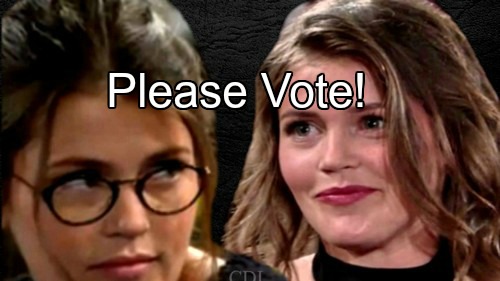 The Young and the Restless (Y&R) spoilers tease that problems could soon emerge for Kevin (Greg Rikaart) and Natalie (Mara McCaffray). Kevin’s connection to Mariah (Camryn Grimes) has already been a real issue, but an even bigger one is unfolding at the moment. Chloe (Elizabeth Hendrickson) is back in town and it’s undoubtedly stirred up old feelings for Kevin.

Of course, we’re waiting on the paternity test results for Bella (Cali May Kinder). Since Chloe didn’t put up much of a fight, that could mean that she has a plan. No matter what the test says, there’s still a chance that Kevin could be the “baby daddy.”

Natalie may not be interested in being a babysitter. She’s the kind of woman who enjoys romance and the high life. It’s tough to see Natalie as the mothering type. The Young and the Restless has given us a character with a blank slate as a backstory. It’s surprising that they haven’t explored it more.

Perhaps Y&R will go deeper eventually. Natalie was an untrustworthy character from the get-go. Mariah has certainly never had a good feeling about her. Once Natalie realizes she’s losing Kevin, a dark side could surface.

Who is the real Natalie? What kind of mysterious secrets are lurking in her past? It’s possible that Natalie has ties to another character on canvas. She could easily be someone’s long-lost child. No one would be too shocked if Natalie pulled some sort of elaborate con.

We’re also wondering about Natalie’s previous career path. She loves the finer things in life. Natalie constantly has a glass of Champagne in her hand. She’s all over Kevin on any given day. Natalie may have been a call girl or at least a con artist who scammed men out of money.

Maybe Natalie has achieved great wealth and blown it several times. Her hacking skills probably came in handy along the way. Natalie may have wanted one epic payoff to set her for life. She didn’t quite get the billions she was envisioning, but she got a hefty sum nonetheless.

Now Natalie may be changing her view. She’s finally found love and it makes us wonder what she’ll do to keep it. We wouldn’t put it past Natalie to change the paternity test results if Kevin is indeed the father. If Chloe doesn’t fix it, Natalie could work her magic. Could Natalie become a crazy, possessive girlfriend?

With Chloe and Mariah in the picture, The Young and the Restless might even have plans to drop Natalie. After all, some shifts have been happening since Mal Young took over as the executive producer of Y&R. Will Natalie be the next character cut? If so, Natalie could really go off the rails. She would have nothing to lose.

We could even see a showdown happening between Natalie and Chloe. There’s no doubt that Chloe would win that fight. She’s holding her own against Victor (Eric Braeden), so she could obviously put Natalie in her place.

Regardless, interesting developments are in the works. We’ll give you updates as more news comes in. In the meantime, you can vote in our Y&R poll. Chime in with your thoughts on Natalie and all of her shadiness. Stay tuned and don’t forget to check CDL often for the latest Young and the Restless spoilers, updates and news.