The Young and the Restless Spoilers: Chelsea Gains Leverage To Save Adam From Prison 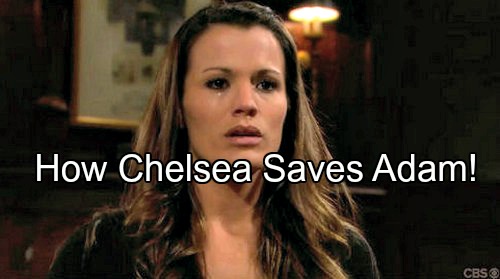 Now, Adam (Justin Hartley) is acting in what he feels is the best interests of his wife and son. But, Chelsea (Melissa Claire Egan) won’t be swayed by any decision he makes because of her deep devotion to the man she loves.

Yes, Adam might hold firm to his plan and not see Chelsea for awhile. But, she’s been through far too much and won’t stop trying to gain her husband’s freedom. This woman endured what she believed was the death of her spouse a few years ago and then was willing to accept that Gabriel Bingham (also Hartley) was actually Adam.

So, prison bars and understandable emotional reactions will hardly squash Chelsea’s feelings on ‘The Young and the Restless’.

Michael (Christian LeBlanc) remains the conduit through which Adam will receive information while he’s behind bars at Walworth. Adam’s attorney may go along with his plan to block Chelsea’s visits to the penitentiary. But, Michael will also keep Adam up-to-date on all efforts that are being made by everyone on his behalf.

Viewers know that one of the lead male actors on this show isn’t going to remain behind bars for 30 years. However, like Victor (Eric Braeden), Adam might be shown in a series of cell scenes that extend for months. Hartley obviously has the chops to work within that confined character space, while Y&R’s writers devise an acceptable, soapy way to eventually enable Adam’s release.

Chelsea currently has no leverage on ‘The Young and the Restless’. However, Chloe’s (Elizabeth Hendrickson) return to Genoa City surely establishes the opportunity for her former best friend forever to make a mistake. It stands to reason that at some point Chelsea will be in a position to discover the missing pages of Sage’s (Kelly Sullivan) journal.

Kevin’s reconnection with his ex-wife also establishes another pathway for this needed evidence to be obtained, or taken. Considering that Chelsea recently recruited Kevin to help her with Adam’s predicament, it’s more than possible that this pair will make progress where Chloe’s role in Victor’s frame is concerned.